October 25th 2014, Elbo Room, San Francisco CA: A few months ago, I wrote a few pieces on a San Francisco concert series called Lucifer’s Hammer. It was a weekly event that featured rare and legendary touring acts supported by the best locals in town. Though the weekly shows came to an end, Lucifer’s Hammer lived on. On October 25th 2014, the Hammer struck once again. Last Saturday night, everyone at the Elbo Room had been waiting for what felt like forever. In my case, “forever” was only about three months. For a select few, “forever” was thirty years. We were waiting for Satan, the mighty New Wave of British Heavy Metal band that never received their due back in the day. Two years ago, the band released their outstanding comeback record, ‘Life Sentence’, but only now have they decided to hit North America in support of it. Last Saturday, Satan made their maiden voyage up the West Coast to the Elbo Room in San Francisco and with the help of some damn great support, brought the Bay Area to its knees.

Space Vacation opened the proceedings with their catchy and incredibly melodic brand of classic metal. The last time I saw them was with HellFire and AC/DShe at Slim’s in 2012, and this set saw the band in bouncier and far wilder form. The songs were quicker, with many Motorhead beats and double-bass attacks crammed in than I remember their old material containing. Guitarists Scott Shapiro and Kiyoshi Morgan also showed a much higher level of comfort and command onstage, with Morgan in particular shining with a multitude of rapid solos. With Shapiro’s smooth and immediately likable vocals, a newfound drive and strong musicianship, Space Vacation were as ideal an opener as one could ask for.

The attendance rapidly increased throughout Space Vacation’s set, which allowed Magic Circle from Massachusetts to show off their riff-laced muscle to the best crowd they could get. With a name that implied overdone occult rock, I was expecting the band to be yet another generic act that rode the line between metal and rock while lightly dabbling in darker lyrical themes. I have never been so happy to be so wrong. Magic Circle blew me away with humble, yet massive doom that was among the most original I’ve heard from a young band. Powerful vocals from Brendan Radigan brought to mind the character and charisma of Harry “The Tyrant” Conklin, while Chris Corry and Dan Ducas’ riffs summoned the simple, yet lethal effectiveness of England’s Pagan Altar. The band showed off a good chunk of new material in this forty-minute set, but it was the battering ram attack of “Rapture” that saw my head relentlessly banging and my fist firmly rising. An outstanding set from a band that I will be watching closely from here on out.

The final support act was one that Bay Area metal fans have known for years, and one of the original featured acts of Lucifer’s Hammer. Love them or hate them, Slough Feg are not going anywhere. This summer, they had to endure the loss of drummer Harry Cantwell and this show was their first with a new lineup in seven years. Feg were more than up to the task, and delivered a classic set filled with many of their best selections. New drummer Mikey Carli ably filled Cantwell’s shoes, letting loose a precise and double-kick driven attack. Carli injected his quick feet well into the likes of “Death Machine”, while lead singer and axeman extraordinaire Mike Scalzi was in prime form as always. Changing costumes at least three times during the forty-five minute set and sporting his signature war paint, Scalzi showed that he is forever the master of the stage, having fun with those in the front rows and jamming his golden Les Paul right out into the crowd. The band ended their excellent set with a quality reading of their classic “High Passage/Low Passage” from ‘Traveller’, or “the space-dog album” as bassist Adrian Maestas gleefully called it.

After a few hours of excellent warm-up tunes, the intro to the ‘Court in the Act’ record, “Into the Fire” began to play over the PA. At 12:25 AM, Newcastle’s Satan finally took the stage and launched right into the blazing “Trial by Fire” and began a truly incredible ninety-minute set. The band was well prepared for their long-awaited San Francisco appearance, playing their songs with incredibly tight and borderline-surgical precision. Singer Brian Ross was in unbelievably excellent form as he nailed every single scream from both the ‘Life Sentence’ and ‘Court in the Act’ records. His demeanor was frequently thankful and jovial, though he wasn’t afraid to demand abstinence from stage diving and moshing after being knocked in the face with a mic-stand. Still though, one could tell that Ross was appreciative of the wild spirit that San Francisco displayed here, as he proclaimed, “I wish I could take you all back with us, you all actually know how to enjoy yourselves!” 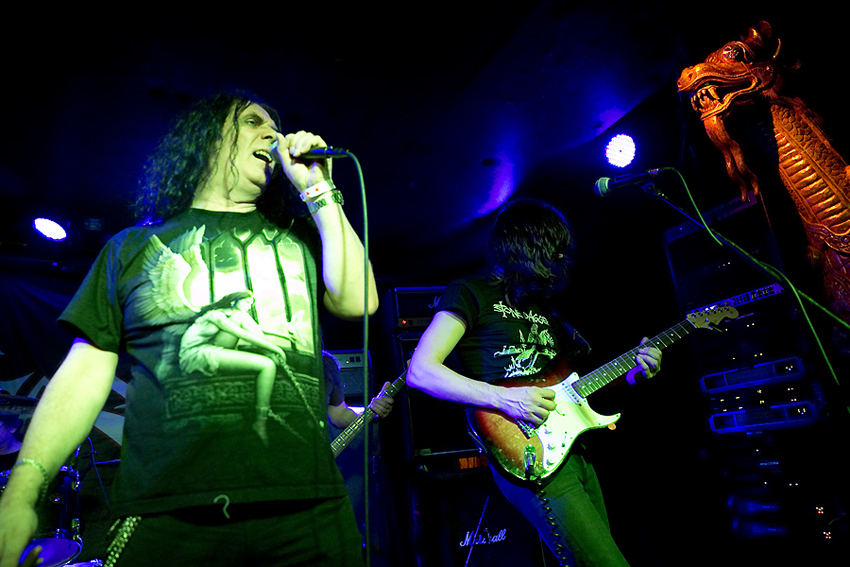 Mixing tunes from their 1983 debut and their 2012 comeback, Satan also made sure to throw in a couple of earlier gems to satisfy the nerdiest of fans. New cuts and old cuts blended amongst each other indiscriminately, and fans went equally wild for all of them. The band themselves all turned in top-notch performances, with guitarist Russ Tippins being a standout player. The guy hit every note of his laser-like solos with ease and grace, while supporting Ross with backing vocals on what seemed like every other line. He and his partner Steve Ramsey turned in ace performances, which came to a jolly and phenomenal climax with a duel during the early cut “Oppression”. The two rammed heads and strolled across the little Elbo Room stage, still executing their parts flawlessly.

As closing time at the packed bar came near, the band offered the chance for a brief one song encore, with Ross asking whether we wanted “Heads will Roll” or “Kiss of Death”. The crowd responded strongest to the latter, and to which Satan obliged and capped off their astounding set. For an hour and a half, these boys from Newcastle showed off a youthful exuberance and energy, while maintaining an older and wiser sense of class and professionalism. It was most excellent. Ross dedicating the set to the late Sam Kress, a Bay Area fan who had given the band their first piece of American press thirty years ago, was icing on the cake.

As the house lights came up, friends and fans embraced one another out of sheer joy, having finally seen the band they had been waiting for. It was the knockout punch after three lethal uppercuts, the exact dose of NWOBHM that San Francisco had waited three decades for. Even as security ushered attendees outside, the fans remained nearby, basking in what they had just been a part of. This was a monumental night for Bay Area metal fans, one that won’t be forgotten any time soon. The Hammer of Lucifer struck once more with the visitation of Satan, and as long as great metal continues to attract sold-out crowds and quality local bands, the Hammer will rise yet again, ready to come down with mighty and terrible power.

Check out a full set of Satan photos by Raymond Ahner here.