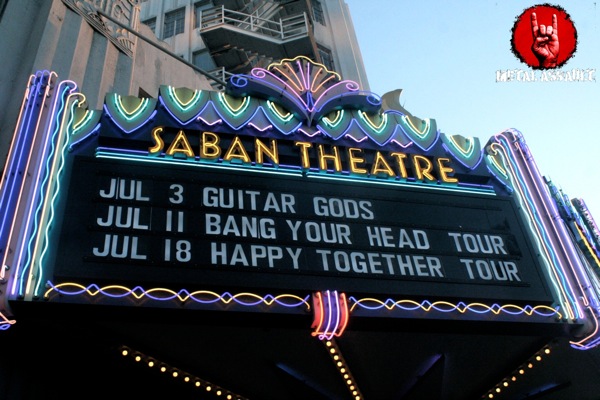 July 3rd 2014, Saban Theatre, Beverly Hills CA: Ever since Joe Satriani and Steve Vai stopped doing their ‘G3’ tours which featured their guitar mastery along with a third special guest guitarist, North America hasn’t had a proper guitar extravaganza to feast upon. A past participant in a G3 tour himself, hugely admired Swedish veteran guitar virtuoso Yngwie Malmsteen vowed to rectify that this year with his advent of the ‘Guitar Gods’ tour and embarked upon a North American run with Gary Hoey and Bumblefoot as the other guitarists in the lineup (originally including Uli Jon Roth as main support but he had to drop out on short notice). The touring party visited the beautiful and historic Saban Theatre in Beverly Hills last night, as Los Angeles’ guitar enthusiasts readied themselves for an overdose of notes, arpeggios and solos. 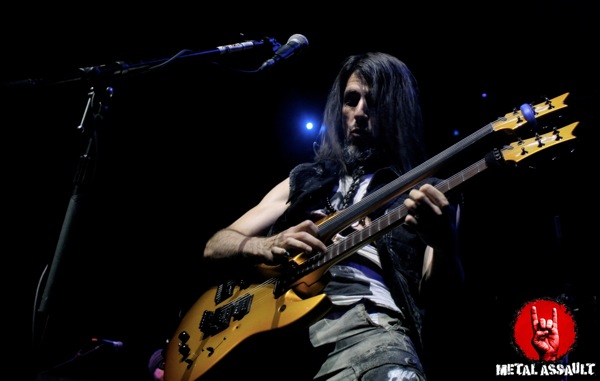 The start time for the show was advertised as 9 PM, so it was a surprise to see Ron ‘Bumblefoot‘ Thal walk onto the stage to begin his set at 8 instead, and I was thanking my lucky stars that I happened to arrive at the venue just in time to see his entire set. Known primarily and almost exclusively as a member of Guns ‘N Roses since 2006, this was Bumblefoot’s first real opportunity to introduce himself as a solo musician all across America and make people aware of the fact that he’s had a longstanding career of his own, prior to getting the GNR gig. In this set he retained certain traits of his musicianship that he gets to display during GNR shows, such as the song ‘Objectify’ and his ever-delightful rendition of the ‘Pink Panther’ theme, but he utilized the majority of his 40 minutes on stage to present a fully expressed and liberated version of himself, both as a guitarist and a singer. He brought forth the vocal aspect a lot more than his two fellow guitarists who took the stage at this show, and while his guitar solos were incredible, his vocals really heightened the impact of his music and showcased a quality most people in this crowd wouldn’t have seen from him before. The music clearly carried a punk vibe as Bumblefoot brought a caveman-like stage presence, and his overall style of presentation was light-hearted and humorous, which made him easily appreciable amongst this crowd. But more than anything, this set was an exhibition of a man in complete devotion to his instrument.  I sympathize with the ticket holders who showed up late and didn’t catch his set. The term ‘Guitar God’ couldn’t be more antonymous to Bumblefoot, because what he did on stage was total guitar worship instead.

[More Bumblefoot photos at the bottom of this post] 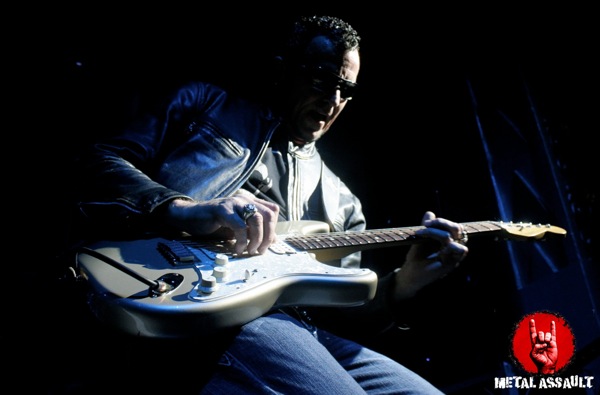 Next up, Gary Hoey graced the stage at 8:50 and lent a rich bluesy touch to the atmosphere inside the Saban with 40 minutes of silken smooth guitar play through his classic Fender-EVH setup which produced a crystal clear tone and came across as pure sugar to the ears. He gave a good account of his abilities when opening for Michael Schenker Group at the House Of Blues Sunset Strip earlier this year, and this time he took it to the next level with an even more compelling performance. His blues/surfer rock tunes were extremely enjoyable, and for anyone who claims to be a fan of rock music, it’s absolutely impossible to dislike what Gary Hoey brings to the stage. ‘Utopia’, the title track of his 2010 full-length album was the highlight of the set and ‘Deja Blues’ off of last year’s album of the same name wasn’t far behind either, but unlike the headline act, there wasn’t a single dull moment in Gary Hoey’s set and I wouldn’t have complained in the slightest if he’d played longer. His performance here clearly showed the enormity of the loss Ozzy Osbourne inadvertently suffered by choosing Zakk Wylde as Jake E. Lee’s replacement instead of going with Hoey who auditioned for the gig in 1988. Gary Hoey’s solo career dates back to 1991 but not nearly enough number of people are aware of his musical talents, and he should be number 1 on every list of guitarists you should know about, hands down.

[More Gary Hoey photos at the bottom of this post] 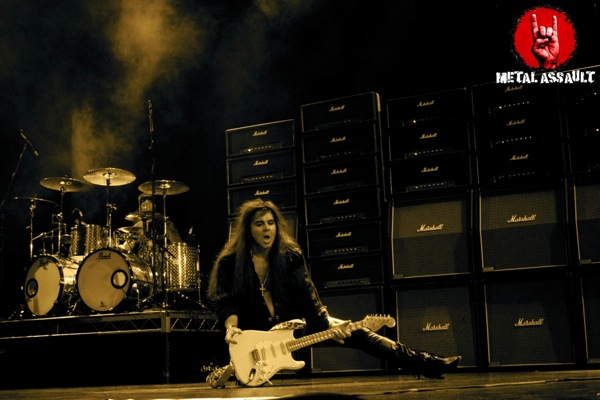 Before I lay into my review of the Yngwie Malmsteen set, for the sake of my reputation and my physical safety from deranged fanboys, I’d like to issue the following disclaimer: After the horrendously cacophonous Yngwie Malmsteen experience I endured at the House Of Blues Anaheim last year, I didn’t think I’d ever go see him in concert again, but with this ‘Guitar Gods’ tour I really expected something different from his standard headline shows, perhaps a jam with the other participating guitarists. And that’s why I broke my oath and decided to stay for his set, even though I could have easily walked away after Gary Hoey exited the stage. If you’re an ardent Yngwie fan, you might want to stop reading any further.

The wall of fake Marshall amplifier stacks (of which only two were plugged in to the PA) .. the guitar tech with ‘Yngwie Who’ on the front and ‘Yngwie Fucking Malmsteen, That’s Who’ on the back of his shirt, and three-fourths of the stage, despite its massive size, marked exclusively as Yngwie’s territory .. the pretentiousness was so thick, it could be cut with a knife, and was in complete contrast to the down-to-earth personalities exuded by Bumblefoot and Gary Hoey. The Swedish guitarist pranced onto center stage and began what turned out to be complete torture for my unsuspecting ears. While Bumblefoot worshipped his guitar and Gary Hoey caressed his, Yngwie Malmsteen absolutely violated the poor ol’ Fender strat with what he did to it for the next 90-plus minutes.

Talking of the only positive aspect of his set, Yngwie’s musicianship on the acoustic guitar was more than tolerable and I wish there was more of that instead of the overly elongated solos, which made even his biggest fanboys in the front row yawn large and wide, as one kid was seen peeking over at the set list to see what’s coming next, already bored with a particular solo which didn’t come to an end for another 10 minutes. His biggest and most loved hits such as ‘Far Beyond The Sun’ and ‘Black Star’ seem to sound worse every year, as was evident by their awful renditions Yngwie put forth here, flubbed notes galore. It was just sad to witness the butchering of these exemplary virtuosic guitar compositions. 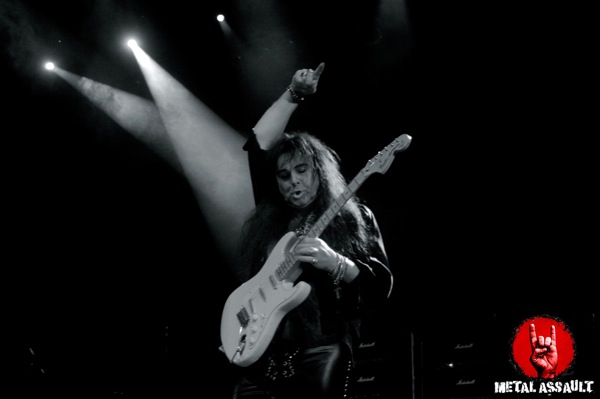 His three band mates got none of the spotlight whatsoever, aside from the bassist who filled the gaps by addressing the crowd while Yngwie momentarily departed the stage on a few occasions during the set, but his role was largely that of a cheerleader for the maestro. The closest those three ever got to Yngwie was when they took the final bow together at the end of the set. The gulf between frontman and the rest of the band couldn’t be any wider.

The worst moment of the set was, without doubt, Yngwie playing the US national anthem. It was by far the worst rendition of it I’ve ever heard and will ever hear, and even as a non-American I felt offended upon hearing this humiliatingly bad version of it. But even worse was the fact that the three-guitar jam I was waiting and hoping for never came. My suffering through the entire set bore no fruit, as there was no sign of Gary Hoey or Bumblefoot even during the encore. To me, the entire purpose of a tour like ‘Guitar Gods’ seems defeated if it’s just an Yngwie headline show in disguise, and by not engaging in a jam with these two fantastic guitarists, Yngwie missed a golden chance to expand his horizons and present something different.

To top it all off in an ironically perfect manner, Yngwie ended the show by smashing his guitar to pieces, something I really despise seeing on a stage, because I view it as a complete insult to the very instrument that brings a musician all the success and the riches he or she gets from playing it. All in all, this Yngwie show was an apt exhibition of everything one should not do as a guitar player, and I seriously hope that young guitarists in the crowd were taking notes to ensure they do not incorporate any of it in their own musicianship.

Despite what I’ve said in the previous six paragraphs, I would still recommend attending the ‘Guitar Gods’ tour for the sake of Gary Hoey and Bumblefoot. As for Yngwie, he has strongly staked his claim as the worst performance of 2014, and it’ll take something extraordinarily bad to beat him to it.