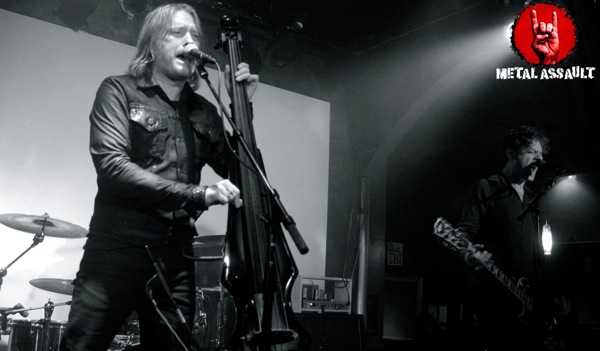 June 30th 2014, The Dragonfly, Los Angeles CA: Owing to their mainman Chris Wyse’s ultra-busy touring schedule performing bass duties for The Cult, Los Angeles-based rock trio Owl’s live appearances have been as rare and random as the creature they’re named after, but they played a one-off headline show at the Dragonfly last night, their first hometown show since the Viper Room gig more than a year ago and for their LA fans it was a rare opportunity not to be missed. Until last night, The Dragonfly was one of the very few (if not the only) LA venue I never went to, so this Owl show was made all the more interesting by the prospect of this new, undiscovered environment.

I entered the venue at around 10 PM and found it to exude a very dim, dive-bar vibe, but the stage looked decently sized and raised up to a good height to enable everyone in the audience to see the performers on stage. At 10:40, the three members of Owl made their way to this stage and kicked off an hour-long set with the title track of the band’s latest album ‘The Right Thing’, proceeding onto present some more material from that record along with selections from the 2009 self-titled debut. As compared to that Viper Room gig last year which was my first and only time seeing Owl, the set list definitely made for a stronger show this time. It was not only longer but the tracks were chosen and put in an ideal order as the set had a better flow to it and as a result, made a greater impact on the audience. I thought Owl was great at the Viper, but last night’s performance was so much better, it made that show look like a funeral procession in comparison. What I saw last year was Owl the band, but last night they sounded like a rock band, louder and edgier than ever before. 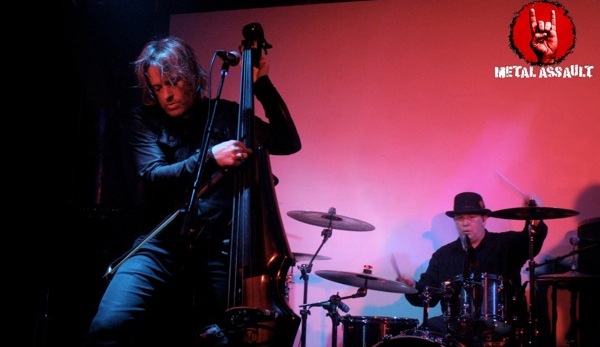 Chris Wyse gave us his best on vocals and bass, both regular and stand-up, and seemed to be in appropriately high spirits as he carried himself through great outbursts of energy and addressed the crowd jovially a couple of times during the set. In guitarist Jason Achilles Mezilis and drummer Dan Dinsmore he has the perfect allies who inject their individualities and know how to gel together with Wyse. Owl’s cover of The Kinks’ ‘Destroyer’ sounded specially great this time. It came in at the right moment during the set, and was followed by the aptly contrasting ‘Rover’. But the band’s rendition of ‘Pusher’ on this occasion stood out as the highlight and sounded much heavier and more dynamic than its studio version, to such an extent that the two versions almost sound like two entirely different songs.

When I interview bands/musicians, a lot of times they say things just for the sake of saying them, but when Chris Wyse told me in an interview last year about his reasoning behind naming the band Owl in terms of having something to do with the mystical, vampiric nature of the bird, he clearly meant it because that’s exactly the vibe emanated by the band Owl, particularly in the live setting. Comprising old-school hard rock, grungy darkness and poppy tendencies, Owl have an identity of their own, possess all the ingredients for success, and if they were a nationally and internationally touring band, they’d undoubtedly garner their own fan base too. But on the positive side, their next album ‘Things You Can’t See’ is slated for a fall 2014 release, so we won’t have to wait four years like in the case of ‘The Right Thing’, and hopefully the wait for their next LA show will also not be as long as it was for this one. Owl truly rocked the Dragonfly.

Check out a full gallery of 42 Owl photos from the show below, or view it here if you’re on a non-Flash device: