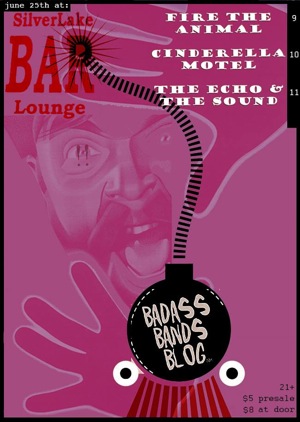 June 25th 2014, Silverlake Lounge, Los Angeles CA: For genuine rock/metal lovers in Los Angeles, there is no such thing as a dull weeknight, and at any given time, if it isn’t one amongst the plethora of national and international touring acts coming through town, there’s usually a solid local show to attend. Last night at the Silverlake Lounge, three LA rock bands Cinderella Motel, Fire The Animal and The Echo & The Sound played a show presented by Badass Bands Blog, an LA-based blog that’s been doing good work with local independent bands and been putting forth some interesting events through their collaboration with venues such as Viper Room and Silverlake Lounge. Having seen only one of these three bands previously, I went into the show not sure what to expect but hoping for a healthy dosage of ‘badassery’. 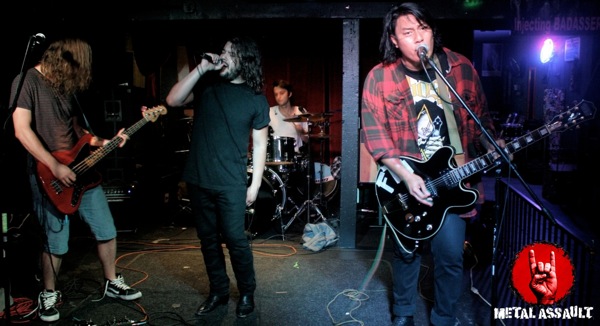 By the time I arrived at the venue, Fire The Animal were about to begin their set. They played 40 minutes of feel-good boogie rock ‘n roll built around a great guitar tone, heavy rhythm section and clean, crisp vocals. Guitarist Jason was excellent on his instrument and David’s vocals came across as a delightful throwback to real rock singing. The set included an absolutely ripping guitar solo from Jason, and I strongly feel there should be more of that in their music. During the set there was also a killer Zeppelin-esque vocal-guitar duel between David and Jason, which is another element they can incorporate more of in their songwriting. But overall it was an unmistakably impressive showing from this promising young band. 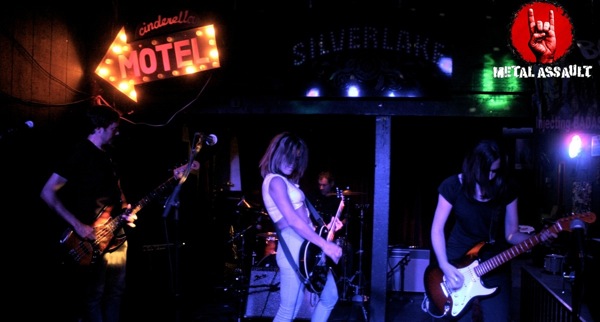 Next up was Cinderella Motel, who released a split 7-inch and played a show with awesome LA rock ‘n roll band The Vigils at Loaded last December, which is where I saw them for the first time. My perception of their set was a lot different this occasion as compared to that evening, perhaps because of the contrast between their musical style and that of Fire The Animal who’d just played. I was able to obtain a better understanding of what Cinderella Motel’s music is all about, which seemed to suit the Silverlake atmosphere much better than central Hollywood, it has to be said. It’s definitely an eclectic blend of styles that wouldn’t normally go together with each other, as a result of which their tunes possess some weirdly interesting curves and transitions. It portrays a darkness in its expression and has a degree of dissonance to its patterns, and while at times it emanates a Black Sabbath vibe, it also has post-rock and punk tendencies. All these wildly varying elements are well embodied by the four members on their respective instruments, fronted excellently by vocalist/guitarist Tomahawk. An intriguing band, to say the least. 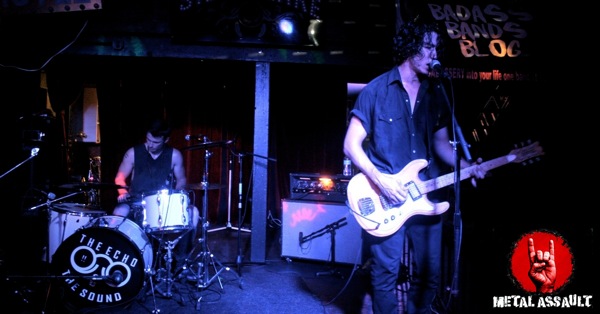 And lastly, two-piece guitar-and-drums band The Echo & The Sound played a set of clean, heavy and simple blues rock tunes that were easy to appreciate as both members Brian Rich (guitar/vocals) and Douglas Jewell (drums) expressed themselves to the fullest and combined together to put forth a sound that suited their two-piece setup but at the same time carried the strength and magnitude equal to that of any rock band with more members. It’s fascinating to observe that even five years ago there were hardly any two-piece bands, specially in the local LA scene, and now there seems to be an abundance of them, which is great to see. Brian Rich used two different guitars to switch between bluesy and thicker, bottom heavy tones, and as a whole, The Echo & The Sound played a good set, although if there’s one thing I could point out that they could add to strengthen their music further, the drummer could contribute more with vocals.

All three bands successfully justified the ‘badass’ tag put on them by Badass Bands Blog, and kudos to everyone involved for an enjoyable night out for the LA local rock fan. More of the same, please.

Check out more photos of Fire The Animal, Cinderella Motel and The Echo & The Sound below, or view them here if you’re on a non-Flash device: