June 24th 2014, Guitar Center, Hollywood CA: One of the biggest perks associated with being a music lover or aspiring musician living in the city of Los Angeles is the large number of opportunities that come our way on a regular basis to directly interact with high-profile professional musicians, to go behind the scenes and get to know their working process. Last evening was one such chance for drummers and drum enthusiasts, as Thomas Lang and Matt Garstka visited Guitar Center in Hollywood for a free clinic, as a preview to the upcoming Big Drum Bonanza in Thousand Oaks CA, an already sold-out drum camp they are both participating in as instructors. A sizable gathering occupied the Pro Audio room inside GC in the early evening, and everyone waited for the arrival of the two drummers.

Thomas Lang, who has jammed with the likes of Paul Gilbert and Glenn Hughes among several others and founded his own avant garde metal band stOrk during the course of a career that has now spanned nearly 30 years, was the first to take the stage at around 7:15. He started out by playing a couple of stOrk tunes, after which he played an extended solo wherein he utilized and demonstrated the entirety of his elaborate drumkit and also wowed the crowd with some stick tricks. It was the perfect combination of flash and substance from this prolific musician, who then went on to talk in detail about his kit, explaining every single item that constitutes it, and answered a few questions that were asked by some in the crowd. His overall approach to the clinic was very professional, and he not only showcased his pedigree on the kit but also proved himself to be an able instructor. Young drummers as well as fans of progressive/experimental music are highly recommended to keep tabs on Thomas Lang’s activities. 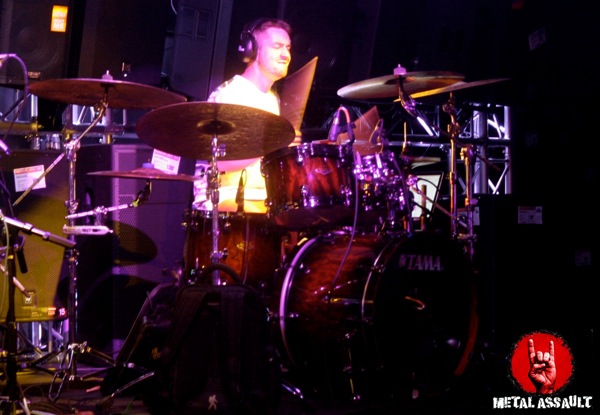 Soon after it was the turn of Matt Garstka, who was sitting in the crowd and listening intently to Thomas Lang this whole time. Garstka joined modern instrumental progressive metal group Animals As Leaders two years ago and saw the release of his first album with the band ‘The Joy Of Motion’ earlier this year, is rapidly earning plaudits for his talents and is fast becoming a highly regarded figure in modern prog. Garstka’s clinic was in complete contrast to that of Thomas Lang, and even as he talked about drumming patterns and arrangements on a very serious note, he brought forth an extremely hilarious personality and presence that lent a light-hearted touch to the atmosphere here. He handed out an instructional sheet to everyone and stressed on how important it is for drummers to make their own arrangements with basic patterns instead of using them verbatim and copying someone else. He demonstrated some of his own arrangements that sounded very similar to what he plays in Animals As Leaders, and ended his session with a play-along cover of electronic artist Machinedrum’s ‘Rise N Fall’, a tune he described as ‘rhythmically inspiring’. Through his exploits in Animals As Leaders, Garstka looks poised to conquer the world with his musicianship in the years to come, and hopefully along the way he’ll do many more of these clinics too.

Following the clinic, a lucky draw was conducted by the organizers where one winner was given a spot on the Big Drum Bonanza, and there were a few other prizes handed out as well. Lang and Garstka stuck around to sign autographs and meet fans, keeping Guitar Center open till much later than usual. All in all, an informative yet entertaining session that gave attendees an insight into the inner workings of two incredible drummers.

Check out more photos of Thomas Lang and Matt Garstka from the clinic in the slideshow below, or view them here if you’re on a non-Flash device: