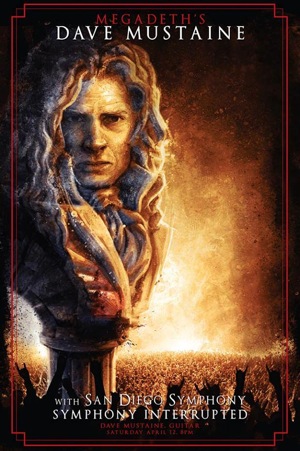 April 12th 2014, Copley Symphony Hall, San Diego CA: For the past few decades, heavy metal and symphony have crossed each other’s paths as several metal bands and musicians have incorporated symphonic elements in their compositions, some even employing the usage of full orchestras to record and perform live. But the much-anticipated ‘Symphony Interrupted’ event at the Copley Hall in San Diego promised to be unique and first of its kind, with classical music at the forefront and a heavy metal icon attempting to lend his touch to it. Throughout their 30-plus year career, thrash metal stalwarts Megadeth have showcased classical influences in their songwriting mannerisms and structures, and to anyone familiar with frontman Dave Mustaine’s musicianship, it came as no surprise when he expressed interest in performing with a full symphony on a public platform. This desire came to fruition and became a reality as he took the stage in his hometown with the San Diego Symphony last night for a sold-out show.

Doors to this lovely venue opened at 7 PM, and the crowd, a blend of the regular symphony audience and black t-shirt clad Megadeth fans, swiftly made its way in. Shirts with the event artwork were on sale along with Dave Mustaine’s autobiography on one side of the lobby, but the Mustaine ‘Symphony Interrupted’ signature wine on the other side was a hot-selling item. His StradiVMNT guitar, a Stradivarius violin-meets-electric guitar kind of instrument created by Dean Guitars specially for this occasion, was on display next to it, and people gleefully stopped by to take photos of and with it. As all attendees waited for the doors to the actual symphony hall to open, the atmosphere was buzzing with anticipation and a sense of curiosity.

Upon entering the hall, the first thing immediately noticeable was the solitary Marshall amplifier half-stack proudly standing next to the conductor’s podium and sticking out as the undeniably odd item on stage. At 8 PM, the lights dimmed and the San Diego symphony opened with an introductory piece, led by associate conductor Ken-David Masur who then proceeded on to introduce and welcome Dave Mustaine to join the symphony on stage. Aptly dressed for the occasion in an elegant tuxedo, Mustaine walked out to a standing ovation and whilst he displayed his usually calm and confident persona that has been built up through years and years of experience, he also had a look on his face that told just how big and meaningful this event was for him.

Together with the symphony, he put the six-string touch to Bach’s ‘Air’ and Vivaldi’s ‘Summer’ and ‘Winter’ movements during this segment of the show. His StradiVMNT guitar seemed to combine excellently with the sounds of the symphony and certainly served the purpose it was designed for, emanating a discernibly classical sound. Even in this setting, Mustaine displayed his usual habit of headbanging to the rhythm of the tunes he played on guitar, not only making the metalheads in the audience feel at home for a change, but also using it as an effective method to keep to the rhythm.

He then departed the stage, and following a 15-minute intermission, the symphony was back in session for the second half of the show wherein the conductor gave a brief history lesson about Antonín Dvořák’s New World Symphony, following which they put on a solid rendition of it. This was the part of the show completely alien to most metalheads including myself, but it was without doubt an interesting passage to observe and after seeing this segment, I could draw many parallels between a symphony and a heavy metal band. Both types of music are built on a combination of multiple layers, albeit the layers forming a symphony are several more in number as compared to the guitars, drums, bass and vocals in a standard heavy metal band. Then there’s the conductor who’s giving it his all and directing his symphony to realize his vision, to deliver the music exactly how he wants it, much like what the principal songwriter of a metal band asks of his band mates. Even though metal and symphony are two entirely different worlds, the similarities are uncanny.

But the one aspect that singlehandedly distinguishes the two worlds is the level of decorum. While a symphony and its audience know exactly when to sit, stand, applaud and keep quiet, metalheads when planted in a venue such as this for an event of this nature can show that they’re not quite adept at it, not yet anyway. The black t-shirt bearers behaved themselves sufficiently well for most of this evening, but of course, there had to be that one guy who’d ruin it for everybody. “Where’s Dave?!” yelled a not-so-gentlemanly dude sitting a few seats to my right in the balcony, during the New World Symphony segment which was performed without Dave Mustaine. He was loud enough to be heard by every single person in the hall. People started looking around with angry, confused faces, but the reaction of the metalhead sitting to my left summed it up perfectly. He buried his head in his hands and groaned, “Oh my God. This is why they don’t invite us.”

But the metal contingent’s patience was rewarded as the Marshall half-stack was rolled back out, signaling the imminent reappearance of Mustaine for the encore. But before he did that, the symphony played the first verse of their delightfully great version of the Megadeth classic ‘Symphony Of Destruction’, and the metalheads’ joy knew no bounds. Mustaine then reappeared for a short encore performance of Richard Wagner’s ‘Ride Of The Valkyries’. He bowed to the audience, thanked them for their attendance and gracefully departed the stage along with the symphony.

The attendees who purchased tickets to this show primarily to see Mustaine might have expected him to participate for a longer duration, but since this collaboration was almost like a test run to see how it works on a symphony concert hall stage in front of a full audience, Mustaine’s participation was in the right amount. Besides, the regular symphony crowd was still in large majority and their interests had to be given importance, so an overdose of a heavy metal guitarist might have been considered inappropriate.

It was undoubtedly a new and intriguing experience for attendees on both sides of the spectrum and should open doors for a regular series of such events. I would certainly welcome it, and recommend it to fellow metalheads as something worth a try. There’s a strong possibility that future events will feature Dave Mustaine again, but I’d also like to see his Megadeth partner-in-crime Chris Broderick join him as he’d be a great fit. When it comes to putting on performances of this nature, there are a few rock/metal guitarists I can already think of, the likes of Uli Jon Roth and Michael Schenker coming to mind straightaway.

Overall, ‘Symphony Interrupted’ lived up to its hype and highlighted the talents of a metal guitar legend in a manner never seen or heard before, and in its endeavor to bring two worlds together, it succeeded in giving both the symphony and metal audiences something to ponder.