February 12th 2014, House Of Blues Sunset Strip, West Hollywood CA: Following the release of his new album ‘Bridge The Gap’, German rock guitar legend Michael Schenker embarked upon a North American tour to not only promote this new album but also to encapsulate his much celebrated career by performing tunes from his solo catalog as well as tenures in Scorpions and UFO. The tour made a stop at the House of Blues on the Sunset Strip last night. There was plenty of excitement amongst Schenker fans in the lead-up to this show. The doors opened at 7 PM, and the atmosphere was steadily building up inside the venue. All was in readiness for a great evening of rock.

Los Angeles-based opening act S.U.N, acronym for Something Unto Nothing, hit the stage at around 8:45.. Featuring in its ranks Brian Tichy on guitar, Sass Jordon on vocals, Michael Devin on bass and Tommy Stewart on drums, the band played a 30-minute set of soulful hard rock with a Southern tinge, led by fantastic vocal delivery by Sass Jordon whose voice resonated all across the House of Blues and made a strong impact. She was well-complemented by Tichy on guitar, who played a good portion of the set on his double-neck guitar. Usually behind the drumkit, Tichy got a chance to express himself on the guitar and was great at it. The rhythm section was extremely solid as well. The tempo of the band’s music was generally slow, but there’s no doubting that slower songs are harder to perform in a live setting than the fast ones, and the kind of impact S.U.N had with these tunes just goes to show their collective musical pedigree. They played five songs from their self-titled album, and are currently working on a follow-up album. Fans of Southern hard rock would do themselves no harm whatsoever in checking out this band.

Check out some great S.U.N photos from the show below. (View them here if you’re on a non-Flash device)

Next up was Gary Hoey, a Boston-based blues/surf rock guitarist who played a 30-minute set here as a completely solo act, taking the stage all by himself and playing guitar with backing tracks. He put on a hugely impressive show, treating this very appreciate audience with some delightfully clean blues-based hard rock guitar play, and excellent vocals to go along with it. His set included title tracks off of his ‘Deja Blues’ and ‘Utopia’ albums, as well as a highly enjoyable rendition of Jeff Beck’s ‘Going Down’. Playing as a solo act with backing tracks certainly put the entire spotlight on him and gave him a chance to show what he’s really capable of, which he did with undeniable success, as was evident from the large group of people that surrounded him as soon as he got off stage and stepped onto the general admission floor. Gary Hoey is a very experienced musician, and definitely a talent to be reckoned with.

And now here’s a review of Michael Schenker’s set, by Jarvis Leatherby:

Temple of rock. That is what Michael Schenker has been calling his band and albums for the past few years. For me as a lifelong fan of the man, these are probably the best words to describe his work. Through the years I’ve seen Michael many times and in many forms. The fledgling 90s MSG tours, the alcoholic drunk Schenker tours, the almost lackluster UFO reunions, and his return to greatness in the past decade. Michael has often been known to many as somewhat of an introvert, maniacal, self-centered kind of person. However if you hear him talking in interviews now, it seems quite the opposite. I am able to look past all the personal stuff, and let the music do the talking for the man. Which it does in volumes.

The House of Blues on the Sunset Strip in Hollywood was looking full for a Wednesday night. As a regular MSG concert goer, I noticed the many familiar faces of the LA rock industry, as well as the guaranteed Schenker regulars. The great thing about being a Michael Schenker fan is that the man consistently puts out records and continues to tour worldwide year after year. This tour is out to promote the latest offering from the Michael Schenker’s Temple of Rock band, his second album using the Temple of Rock moniker. The first record under this name featured a lot more guest appearances, but the newest one titled Bridge The Gap features a more solid lineup. Schenker is notorious for changing the lineup of his touring band every time he hits the road.  I don’t think this is because of any difficulties getting along with people these days, it is merely to shake things up and keep them fresh. The man has worked with so many musicians over his career spanning over four decades, it’s nice to see them come and go. One thing that is usually true is, once a member of MSG, you never know when you will get the call to rejoin for a record or a tour. 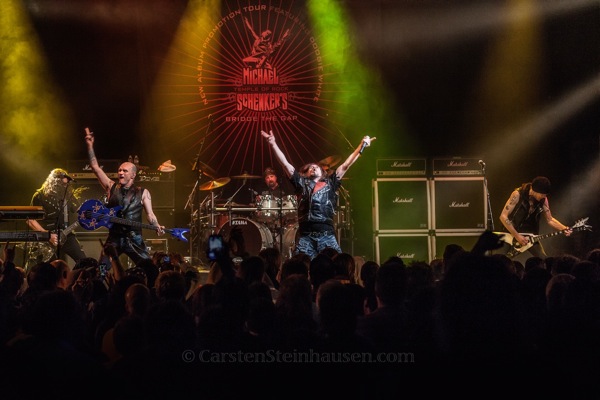 This lineup consisted of Michael, of course (taking over stage left), Rev Jones on bass, Pete Holmes on drums, Doogie White on vocals, and the longest standing current member and utility guy Wayne Findley on keyboards and rhythm guitar. In true MSG fashion, the show opened up with the opening track of the newest album. You can’t help but feel for someone like Michael who has written so many great classic songs through the years, but still has that ever growing creative spark inside of him.  He always honors the crowd by playing the old favorites, but creatively and artistically you have to give him the respect for playing some new jams as well.  This is a man who recently said he does not ever listen to music other than his own playing.  His music is his life and he feels like he doesn’t need the influence of musicians and their music. That’s heavy.

Coming back to the gig, it was immediately great to see Rev Jones on bass.  Elliot “Dean” Rubenstein has been handling the bass duties for Michael more frequently than anyone else in recent times.  Although he is a decent bass player, he has zero stage presence, and is a walking poster for Dean guitars, which is cool, but it has nothing to do with the show. Rev Jones, on the other hand, was on fire all night.  It’s fair to say that anyone not familiar with Schenker or his tunes would have had their eyes on Rev Jones just as much as Michael. With his running, jumping, and two-hand tapping techniques to go along with his colorful style and tattooed bald head, he really is entertaining to watch.

I think the set list was perfectly designed.  A few newer songs, mostly classic MSG tunes for the bulk of the set, and a huge rock block of UFO classics to finish it out. Michael Schenker looks and sounds better than I have ever seen him.  He’s lost a ton of weight in recent years, seems happy and sober all the time, and has been playing out of this world. One who has always been known for trendy styles as well, Schenker took the stage looking like a heavy metal hipster with his skinny jeans, high top Nike’s, American apparel hoodie with the sleeves cut off, zipped halfway up with no shirt underneath, his classic black leather vest over that, and his black knit beanie covering his head to round out the H&M guitar hero collection.

My one and only gripe about this concert would have to be Doogie White. I will admit that I had gone into the show with a somewhat negative feeling about him already.  He is a good vocalist, has done a lot of really cool things and Michael seems to like him a lot and has used him predominantly on his last three releases. But quite honestly, he is probably my least favorite singer for MSG and his performance last night was far from perfect.

At first, I thought he was doing a decent job, but that is up only until the point when he started singing the third verse to the UFO classic lights Out during Michael’s solo. The entire band was trying to get his attention to tell him to stop singing and find his place in the song. I know as a musician that mistakes happen live all the time, but it was just a little sad to see it come from a professional on one of the most classic songs in the catalog. All in all though, this was another great showing from Michael. Always go see this man perform if you get an opportunity. He is a living legend who gets better every time.

Check out a full gallery of Carsten Steinhausen’s amazing photos from Michael Schenker’s set below. (Note: If you’re reading this on a device that does not support Flash, view the photos here)