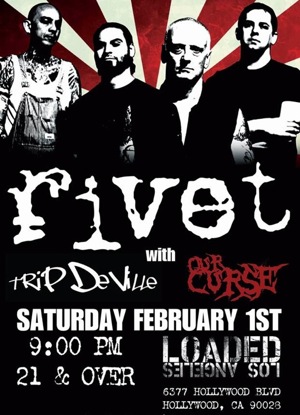 February 1st 2014, Loaded Rock Bar, Hollywood CA: Continuing their tradition of Saturday rock shows, Loaded Hollywood served host to another all-local lineup last night featuring Rivet, Trip DeVille and Our Curse. With well-chosen bands, reasonably priced alcoholic beverages and its prime location in the heart of Hollywood, Loaded has contributed positively towards building a local rock culture in recent months, having spotlighted great local bands like Mötochrist, Caveman Voicebox, A Pretty Mess and Night Demon in the past few weeks. Last night’s show was no different in that regard, and gave an opportunity to these three bands to show their wares, and a habitable environment for rock lovers in Hollywood who visited the club in anticipation of an enjoyable night of live music and booze.

But with that said, while it was just another Saturday night for many involved, it meant a lot more to some, specially the opening act Our Curse who were playing their first ever show. They provided a furiously intense start to the evening’s proceedings with an impressive set. It’s hard to accurately describe their music to someone who has never heard of them, but in essence, they take the best aspects of 90s metal and give it their own touch by throwing in additional elements. Bands like Lamb Of God and Pantera came to mind instantly while watching Our Curse’s performance and demeanor on stage, but there was a lot more to their music, with vocal harmonies, scorching guitar solos, a tight and prominent rhythm section, and an overall dark, expressive vibe coming through the vocal delivery. The band is a very new entity, but they’ve already announced themselves as a noteworthy live act, as was evident from the generally positive response they received from the small but steadily building crowd here at Loaded.

Shortly after were a three-piece band called Trip DeVille whose music was a massive departure from that of their predecessors. They certainly brought a crowd with them as the live music room at Loaded was packed with a large number of people during their set, much more so than for the other two bands. Their music had ingredients of hard rock and grunge for the most part, with the vocalist/guitarist and drummer switching lead vocal duties through the set. The songs with the drummer on lead vocals were musically better as they allowed the guitarist to express himself far more freely on his instrument, and whenever he got a chance to rip on that guitar, he produced some excellent solos. They ended on a great note with an instrumental track, easily the most ‘metal’ part of their set. Even though some of their music was too stripped-down and grungy for my personal taste, their set was great for this setting, and if they can infuse more of the drummer’s vocals into the music, they’d be even more rocking than they already are.

And finally, Rivet took the stage and played a set of heavy rock n’ roll. Sadly, a lot of people who watched Trip DeVille didn’t stay for Rivet. This trend of people watching only their friends’ band and not even giving any of the others a chance is rather unfortunate, and the rock scene could definitely benefit from people checking out all bands at a show as opposed to just the one band they’re already fans of. Regardless, Rivet didn’t let this deter them from giving it their 100 per cent and making the handful of attendees rock out to their tunes. Not only because of his vocals but also with the manner in which he was holding his microphone, the vocalist looked like Lemmy without a bass, and the band’s music came across as a good, solid brand of hard rock which could be described as AC/DC-esque with Motörhead-style vocals. They made for the perfect soundtrack to a drunken Saturday night in Hollywood and none of the people in this crowd would have any complaints or criticism, but if anything, Rivet could use more guitar solos in their tunes as they were certainly lacking in that aspect. But other than that, Rivet did a great job last night. They’ve been around for a few years and are working on starting a new chapter in their career, so followers of the LA local scene should keep their eyes and ears peeled for more Rivet in the near future.

Overall, Loaded once again did not disappoint with its Saturday night festivities, although the show seemed to end a lot earlier than usual and could have been better off with one more band in the lineup. But, all attendees had a blast as they indulged in live music, alcohol and some killer tunes played on the PA between sets in both rooms. Loaded Hollywood has undoubtedly built up its group of regular customers and local bands would be well-served to play shows here.