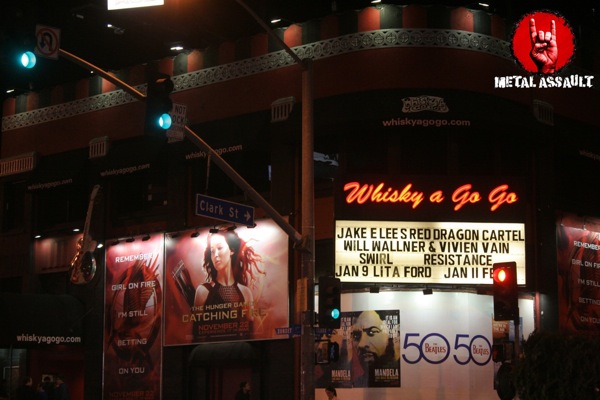 December 12th 2013, The Whisky, West Hollywood CA: Primarily known in the world of heavy music for his contributions to Ozzy’s ‘Bark At The Moon’ and ‘The Ultimate Sin’ albums and for his band Badlands, guitarist Jake E. Lee was under the radar and away from the scene for two decades, and fans of his work always wondered where he was, what he was up to and whether he’ll ever play music again. After years and years of secrecy and hiding, Jake E. Lee has finally re-emerged in 2013 with a new band called Red Dragon Cartel, and will be releasing the self-titled debut album on January 28th via Frontiers Records. Last night at the Whisky A Go Go was the official launch of the band, with their first ever live performance. Naturally, there was huge hype among fans in anticipation of this event, and expectations were high.

But before Jake’s band took the stage, the audience was treated to three main opening acts. The first of them was Los Angeles-based heavy metal band Resistance and they took the stage at 8:45 PM to play 30 minutes of straight-up heavy metal. They put the whole nine yards into their performance and presentation, with a stage backdrop that clearly spelled who they were, artwork on the bass drums and fog machines, and this visual aspect made it easier for them to connect with this crowd. Their strongest musical elements were their vocal harmonies and guitar melodies, and they put on quite a decent show, closing the set with a well-performed cover of Iron Maiden’s ‘Flight Of Icarus’ which they ended with an epic scream by the singer, a la Bruce Dickinson. My only criticism of their performance would be the double-bass drumming, which at times didn’t keep up to the tempo of the songs. Other than that, not a bad set at all.

Next up was another Los Angeles-based band called Swirl, whom I had actually seen a little over four years ago when they opened for Ratt and Extreme at the Wiltern and House of Blues Anaheim. I remember digging their music back then, and for some reason, never heard or came across their name ever since. But I was expecting a performance at least as good as what I saw from them in 2009, and even after this long gap, I was glad to note that Swirl still have it in them to deliver a great set, as they did last night. They bring forth a largely forgotten style of hard rock which was made popular in the late 80s and early 90s by bands like Guns N’ Roses, and hasn’t really had any worthy successors in the last two decades. Strong vocals, scorching guitar leads and a high-energy stage presence were only some of the many positive traits of Swirl’s greatly enjoyable performance last night. The world of music needs more of the good ol’ hard rock, and hopefully it won’t be another four years until I get to see Swirl deliver this very style of music on a stage again.

Main support for this show was provided by an act called Will Wallner & Vivien Vain, featuring ex-White Wizzard gutiarist Will Wallner and his wife Vivien on vocals, along with Giovanni Durst, also a former member of White Wizzard. The duo put out their debut studio album in 2010 and are currently working on a follow-up. Despite having seen Will perform with White Wizzard on numerous occasions this year, and having listened to and followed his side project ever since it began in 2010, I never got the opportunity to see them live and last night I was finally able to rectify that. As is clear from his past releases and live performances, Will is an extremely talented guitar player and he brought his A-game to the stage last night, showcasing his repertoire on that Gibson guitar of his, not only presenting the new and older Wallner-Vain material but also paying tribute to one of his guitar heroes Gary Moore with a cover of ‘Thunder Rising’.

Vivien’s vocals complemented his guitar play excellently and the overall vibe created by this band was more along the lines of classic Rainbow, Deep Purple, Dio and the likes. Aptly, they ended their set with covers of ‘Burn’ and ‘Perfect Strangers’ as a tribute to Jon Lord. I thought the band steadily built up the momentum song by song, hitting their peak with the Deep Purple covers, and I only wish they had a longer set because they could have easily ridden on that high for at least a couple more tunes. Aside from the two main protagonists who both put on a great show, Gio’s drumming was exemplary and fill-in bassist Curt Remington played his part as well. I have no doubt that the band made some new fans last night, and hopefully it will inspire them to play more shows on a regular basis.

Next up, TV and radio personality Eddie Trunk came out on stage, firstly to conduct a raffle giveaway of five Red Dragon Cartel CDs and a signed Charvel guitar, and shortly after, to introduce the headline onto the stage. Red Dragon Cartel made their way and the four members took their respective positions, the loudest cheer obviously accompanying Jake E. Lee’s arrival, a man most people in this crowd never thought they’d see perform in 2013. They began with the title track off of Ozzy’s Ultimate Sin album, which instantly got the crowd excited and singing along. Then the quartet dived into a set consisting of a blend of tunes from the upcoming Red Dragon Cartel album, Ozzy covers and quite a lot of Badlands thrown in as well. The most easily noticeable and appreciable aspect of the band’s show was the exploits of Jake E. Lee on the guitar. It was evident from the crowd’s response that despite his long absence, they still remembered and admired him for his short-lived stint in rock n’ roll back in the day, and Jake obliged them by putting on a tremendously good performance, laying down those solid riffs and shredding away with some delightful solos, all delivered through a killer guitar tone. Jake E. Lee is very much alive and well, and still kicks ass. 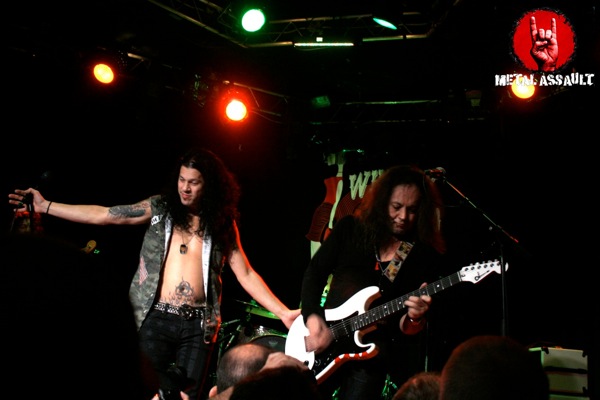 It was purely delightful to see and hear Jake’s playing, and aside from the covers, the four Red Dragon Cartel songs sounded great as well, but sadly, the show was heavily marred by the performance of the singer Darren James Smith. I should cut him some slack because this was his first ever gig with this band, but to be honest his vocal delivery was weak, to such an extent that even some of the cover songs were unrecognizable and unenjoyable, specially the set-closer ‘Bark At The Moon’ which he absolutely butchered, seeking assistance from the crowd for the chorus lines way too often. He was much too intoxicated with alcohol consumption. The habit of drinking heavily before going on stage works for some singers, but it certainly didn’t seem to work for this guy. Just to clarify, I have nothing against him, and my assessment of his performance is strictly objective and unbiased.

Looking at it positively, things can only get better from here for Red Dragon Cartel. Jake E. Lee is clearly still a phenomenal guitar player, his bassist Ronnie Mancuso and drummer Jonas Fairley were very solid in their roles, but the singer definitely needs to put in some work, and perhaps that will come in due course of time when the band plays more shows and gets into touring mode. So overall, it was a pleasure for all in attendance to be part of a historical event with this being Red Dragon Cartel’s live debut, but it was somewhat underwhelming and left a lot to be desired.