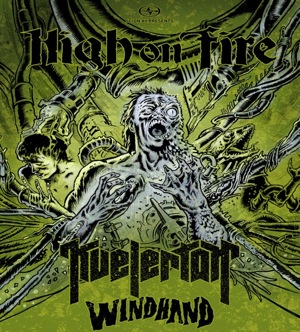 December 12th 2013, El Rey Theatre, Los Angeles CA: Formed in 1998, the trio known as High on Fire was brought to life by guitarist/vocalist Matt Pike, who came from the popular underground stoner/doom metal band Sleep. Their doom/Southern rock style with a hint of thrash has garnered them fame within the metal circle. Their 2012 release ‘De Vermis Mysteriis’ attained No. 63 on the The Billboard 200 charts. Touring with Mastodon, Dethklok and even Metallica, they have certainly risen them to become a must-see live act. Last night’s event was held at the El Rey Theater, where I had the honour to see Anathema and Alcest in October. Doom metallers Windhand and Norway’s own rock/metallers Kvelertak were to join this night. I saw High on Fire back at Gigantour 2008 and supporting Opeth about 6 months later. Although I wasn’t attending those concerts for them, I was at least midly interested in their live show. Now more open minded as I’ve grown older, I was looking forward to seeing them on a headlining tour.

I arrived at the venue at around 7:45 PM, with the line to get inside already in motion. Noticeably packed, I could feel the anticipation for tonight’s show as I walked in the beautiful interior of the El Rey Theater. Holding close to 1,000 at full capacity, the El Rey Theater sports an elegant and classy texture. Three large candeliers encase the ceiling while elegant curtains and a classical architecture. Normally for the first opening act, the crowd is generally scarce and still entering the venue. However it was surprisingly nearly full, and Windhand was still setting up on stage. Also, a large amount of the fans in attendance were in true doom/stoner form: 70s Rock shirts, extra bushy beards and plenty of weed to go around. Doom, Southern rock and a bit of metal was in the mood for everyone, it certainly seemed.

8:00 PM came to be, and the doom rockers Windhand took the stage. Hailing from Virginia, the 5 piece brought their doomish, raw attack to this Los Angeles crowd. Fronting the band was vocalist Dorthia Cottrell. No growls or harsh singing was used, just a melancholic yell that fitted the band perfectly. Bass driven, as many of the bands within this genre are usually, the tone was raw and definitely served its purpose. Being that I almost never attend these type of metal shows, it was an eye opener. As you attend all kind of concerts and listen to new bands, your tastes expand and change in pieces over time. Technical monstrous musicianship, extremely fast playing and blisterning lyrics were not found here, and I was perfectly okay with that.  Windhand played a solid 30 minutes of Doom metal with a sludgy atmosphere to include it with.  The crowd liked what they heard and were all cheering by the end of the set.

By 9:00 PM, Kvelertak took the stage, and the crowd, close to 85-90% full, was already cheering when their intro tape went off.  I had no idea who they were, their music style or anything. What I did notice right away was that the band has 3 guitar players and the singer came out with a large owl mask, which had the crowd going nuts. I definitely knew this was to be an interesting performance; but little did I know how much I was going to be enjoying them.

Not withstanding the owl mask, Kvelertak played an eclectic style of metal I wasn’t used to hearing often. Traveling all the way from Norway, Kvelertak opened their set with “Åpenbaring”, melodies and a Southern rock style impended the building. I’ll be honest, I was apprehensive about a metal band, not named Iron Maiden, using 3 guitars. And although the first song was the sound still being somewhat configured by the soundboard, eventually it cleared, where you could hear each guitar use a combination of sludge, melody and power. Out of nowhere in the song, blasting and enticing morbid tremolo riffs were being played at full speed. The crowd ate it all up and it was very surprising.  Kvelertak were playing black metal underneath and they were absolutely getting away with it! I was completely floored on how varied their music sounded, and how tasteful and enjoyable it was. By the 3rd song of their set, a jazzy, smooth drum solo was being played. Not exactly playing the style of Windhand and High on Fire, it was more than exceptional to hear this kind of musicianship. The lead guitarist was also using his picking hand almost as a fingering bass hand. The notes within the solos being performed definitely enhanced the experience. And by the half of the set, I notice the songs were more calmer and more to speed with what the crowd was expecting. Everyone around me were at the least calmly headbangning along while seeing in the distance, the front row going berserk in the pit. Overall, Kvelertak played the best set of the night and received a large ovation after their 45-minute set ended. I will definitely catch them the next time they play here again.  Definitely worth your time.

And right on time, High on Fire took the stage at 10 PM as scheduled. The crowd roared as Matt Pike took the stage; tattooed, shirtless and ready to play the metal the band is certainly known for. “Fertile Green” opened the set, with the pit increasing in ferocity and quantity. The 3-piece from Oakland, California played in vintage Southern doom metal form. Pike’s menacing vocals with his numbingly sludge-driven guitar tone overpowered the venue. His guitar solos were messy, full of speed and raw emotion. Jeff Matz’s bass tone could be felt through the floor. One aspect of only one guitar playing live is the audibility of the bass guitar. Especially with the amount of distortion used with it, it wasn’t a clear sound by any means. And for this kind of show and High on Fire playing a grindy, dirty unclear sound was the overtone of the evening:  And it wasn’t pretty by any means.  And it wasn’t supposed to be. You’re able to be overtaken by the raw, mud-slinging energy within the air. Des Kensel’s drum sound could have been a little louder, but it wasn’t too big of a deal. “Eyes and Teeth”, “Baghdad” and especially the closer “Snakes For the Divine”, were the biggest hits in their 80 minute set. Although, the crowd enjoyed it all, puffs of smoke within many portions of the venue, headbanging and a chaotic moshpit could all be found on this Thursday evening.

My expectations for High on Fire were not too great or low, but I was certainly surprised on how I enjoyed their performance. They’ve certainly developed a much larger following than when I saw them many years ago.  For all fans of stoner/doom metal, High on Fire do not disappoint.  And for any metal fans looking to expand their pallet, they certainly bring a curious, high energy live performance alive.