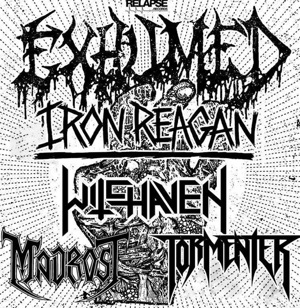 December 11th 2013, Chain Reaction, Anaheim CA: Carrying on with their relentless touring cycle, Northern California deathgrind masters Exhumed returned to Orange County last night to play at the Chain Reaction, as part of their current run of dates with Iron Reagan as support act. Local support for this particular gig came from Witchaven, Madrost and Tormenter. Both Exhumed and Iron Reagan played in this region recently on their respective tours with Dying Fetus and GWAR, but this being an all-ages show with a largely affordable ticket price of $14 and the Chain Reaction having witnessed some off-the-roof crazy shows in the past, this was an exciting prospect for attendees and the turnout was expected to be excellent.

Tormentor began proceedings at around 7:15 PM with a 25-minute set. They turned out to be a well-chosen opening act for this lineup and gave this audience a taste of their brand of thrash which distinguishes itself from that of other bands mainly through the meaty guitar tones and crushing vocals, a la Testament. The crowd was small at this point but some of them got involved in the band’s set and started mosh pits. As I said in a recent review, this band has developed tremendously as compared to a few years back, and it’s good to see them resume live activities again with shows on a more regular basis. They played the Metal Monday event at Skinny’s last month and will be opening for Exmortus at the Universal CityWalk next Monday, and even though their set last night was too short and was missing some of their best songs, based on this performance it’s clear that the more they play, the better they will get.

Next up was Madrost, a band that has really caught my eye and ear with some highly impressive gigs this year. The miniscule frontman Tanner Poppitt was in his element once again as he belted through four ferocious songs, starting off with a new one called ‘Subterranean Nightmare’. The band has gone through various lineup changes in their career thus far and last night they were playing with yet another new lineup, but this incarnation of the band seemed to nail down all the tunes really well. Unfortunately their set was much too short to achieve what the band would have aimed to do with this show, but nonetheless, it was enjoyable to watch Madrost albeit briefly. Southern California needs more Madrost shows.

Before Witchaven began their set, I had a strange feeling about them because the last two times I saw them they played as a three-piece band with just one guitar, which is certainly not the way to go for their style of musicianship. Besides, they were playing too many shows at that point. But of late they laid low to an extent, and last night when they walked onto the stage with a second guitarist, I was instantly stoked at the prospect of witnessing a proper Witchaven set. The first three songs, including a new tune called ‘Death Rides A Horse’, sounded excellent, and this was precisely the Witchaven sound that garnered them their fan base in the past. The crowd was getting into it, but alas, as irony would have it, Witchaven were back down to one guitarist again as frontman Henry Montoya’s guitar cable was broken and he had to do the rest of the set as a vocalist only. But they still finished out the set with ‘Black Thrash Assault’ and ‘Unholy Copulation’. The equipment issues prevented this Witchaven set from ending up as a great one, but it was still good in the sense that it gave us a glimpse of what this band is really capable of.

With that, the local openers were done with and it was time to get ready for the first of the two main acts Iron Reagan to take the stage. Hailing from Richmond, Virginia, Iron Reagan features in its ranks Municipal Waste vocalist Tony Foresta and guitarist Landphil Hall, along with ex-Darkest Hour drummer Ryan Parrish in their five-piece lineup. Their 40-minute set absolutely annihilated this place as the floor was ablaze with fast circle pits and stage dives, and Iron Reagan’s crossover hardcore punk made an instant impact on this crowd. Quite a few of these people were already Iron Reagan fans and that’s the band they mainly came here to see, but for the others in the crowd who were seeing and/or hearing the band for the first time, it was quite a memorable experience as the band was successfully able to infuse the Municipal Waste attitude and present it in a different musical form. They filmed a music video for the song ‘Debt Collector’ last night, and as soon as Tony Foresta made that announcement, the crowd went nuts and gave it their all. The song was played twice for the sake of the filming. Aside from material off of their solitary full-length ‘Worse Than Dead’, they also played a couple of tunes from the new Iron Reagan/Exhumed split, which is slated for a January 7 release via Tankcrimes Records, but was available as vinyl at the merch table. And towards the end of the set came a fantastic rendition of Cannibal Corpse’s ‘Skull Full Of Maggots’ which was just the icing on an already delicious cake. Overall, Iron Reagan’s show lent a great degree of fun and energy to the atmosphere inside the Chain Reaction. I can foresee them becoming an actively touring band, a band people won’t easily get tired of seeing.

At 10:15, Exhumed appeared on stage, amidst a crowd that seemed a little tired from Iron Reagan’s onslaught but soon after Exhumed laid into their tunes, the energy and intensity levels were restored and the band delivered a truly great performance. As compared to the last time I saw them at the Troubadour where they opened for Carcass, this was a much better Exhumed live experience, and getting to feel the sheer strength of their sound in this tiny room was an altogether different beast. A lot of people might have a jaded attitude towards Exhumed shows because they tour as much as they do, but when you look at it positively, the constant touring has polished and carved the band into an incredibly fierce live act, and they only seem to get better each time they come through here to play a show for us. In comparison to all the tours they’ve done since their 2011 release ‘All Guts, No Glory’, last night they were perhaps at the peak of their powers, and in my opinion, the four songs off of the latest release ‘Necrocracy’ were the highlights of the set as they brought forth the maturity and depth in the music, something the band was never known for prior to this album. With that said, they played plenty of old tunes as well, pleasing the longtime fans in the crowd and like Iron Reagan they also presented a couple of tunes off of the new split release. The Siege and Negative Approach covers were great sing-along additions to the set, and so was the cover of Metallica’s ‘Four Horsemen’ which was played at the end of the set, as the Metallica fans in this crowd lost their minds. And aside from all of this, of course they had their usual theatrical element during Bud Burke’s guitar solo. Matt Harvey and the boys in Exhumed certainly brought their best to this Chain Reaction stage. It remains to be seen as to how long they’re able to maintain this peak-level performance, and whether they’ll get even better, but if their future shows are anything like this, I’d have absolutely no problem with them playing in Southern California regularly.

Overall, this was a fun-filled evening for all involved. There’s just something unique about the Chain Reaction that never fails to enhance the impact of any show it’s hosting, and last night was no different in that regard as this all-ages crowd brought bundles of endless energy with it, and although some of them surely got drunk before the show, as was evident from the number of empty bottles seen in the parking lot, this venue proves that alcohol is not necessary for the enjoyment of live music. Here’s hoping for more such great shows at the Chain Reaction.