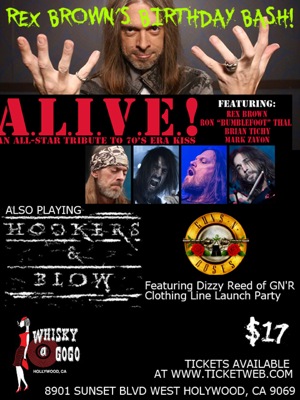 July 24th 2013, The Whisky, West Hollywood CA: A.L.I.V.E.! is an all-star tribute to 70s era KISS, featuring Guns N’ Roses guitarist Ron ‘Bumblefoot’ Thal, Rex Brown of Pantera fame, his Kill Devil Hill band mate Mark Zavon on guitar, and the tireless and ever-awesome Brian Tichy on drums. The band played a show at the Viper Room at the beginning of this month, and were back at the Sunset Strip, this time at the Whisky in celebration of Rex Brown’s birthday week. Having missed that Viper Room show, I had absolutely no intention of missing this one. The calibre of these musicians as individuals is quite obvious and well-known, but it remained to be seen whether they would be able to create a group dynamic and pull off the KISS songs the way they’re supposed to be played.

It was a long and rather tedious wait before the stage was cleared and readied for our headline act to perform. It wasn’t before 11:30 PM that they appeared on stage. It turned out to be well worth the wait though, as the band laid into those KISS classics with utmost conviction and enthusiasm. I was kind of expecting Bumblefoot to do the ‘Ace’ part of the band but I was very much pleasantly surprised to see him do ‘Paul’ instead, with Zavon taking up the Ace role. I have always respected and admired Bumblefoot the guitarist through his GNR exploits in recent times, but Bumblefoot the singer was an entirely new avatar for my eyes and ears, and I’m glad to say, he did a fantastic job at it. When he plays guitar, it seems like the music flows through his heart and soul into the instrument, and perhaps the same can be said about his vocals. He proved himself yet again as a true musician and my respect for him has grown tenfold. And the best part? No lyric sheets!

As for his band mates, Tichy donned a whole new role as well, shifting from doing John Bonham songs last weekend to recreating the Peter Criss sound on this stage, complete with the vocals as well. Tichy the drummer nailed every single part and added his own, specially on songs like ‘10000 Years’, and his vocals held through nice and strong, the shining moment being ‘Black Diamond’ in that regard. Zavon did fine on guitar and vocals too, doing the Ace-dominated part of the set with ‘Shock Me’ and ‘Rocket Ride’ with aplomb. This show was promoted as Rex Brown’s birthday bash, and sure enough, there was a little Happy Birthday sing-along led by Bumblefoot, but other than that Rex kept a low profile and focused on his musicianship, doing justice to the Gene vocals on songs like ‘Cold Gin’ and the bass parts throughout the set, ‘God Of Thunder’ included. Appearance-wise, he looked more like the 90s Pantera Rex Brown rather than the Kill Devil Hill version of him. Out went the Oakley beanie and the beard, and there he was in all his element.

Aside from all the KISS music, the show had its fair share of comedy and surprises as well. ‘You wanted the best, well .. they’re not here but you have us!’ said Bumblefoot at the start of the set which immediately struck the right chord with the audience. Then there was the Gene Simmons lookalike in full costume who was called up on stage. He even sang ‘Calling Dr. Love’ with the band. Bumblefoot seemed to be loving every moment in the spotlight, being the frontman. He is brilliant when playing for GNR in huge arenas, but last night brought out an entirely different personality from him, in a much more intimate setting. Not only him, but all four musicians took on a role much different from what they’re known for, and did a great job at their KISS tribute even without the costumes, makeup and stage gimmicks. For this group, it was all about the music and I enjoyed that.

The band went on well past 1 AM and ended the set with the crowd favorite ‘Love Gun’. Speaking of which, the place was nearly packed at the start of the set but this being a Wednesday night, some people started leaving as the clock got close to the 1 o’ clock hour. Didn’t really make much sense to me though, and that’s one thing I fail to understand about Hollywood crowd sometimes. How much sleep can you really get in those extra 10-15 minutes? But anyway, you’ve got to love Hollywood, because to have such incredible musicians just come together and play KISS songs is something that can truly happen only in Hollywood.