May 9th 2013, House Of Blues, Anaheim CA: Until last night, it was nearly five years since I last saw Yngwie J. Malmsteen perform on stage, at the Avalon in Hollywood sometime in October 2008. Time flew by, he did a tour here in 2011 that I had to miss out on, and finally the day had arrived when I would get to witness his virtuosic guitar show. When I got to the House of Blues in Downtown Disney around an hour before doors opened, there was no queue of people waiting to get inside, and the tickets weren’t sold out by any means. But by the time the show was ready to start, there was a more than decent sized gathering of people here, ready to have the fury unleashed onto them. 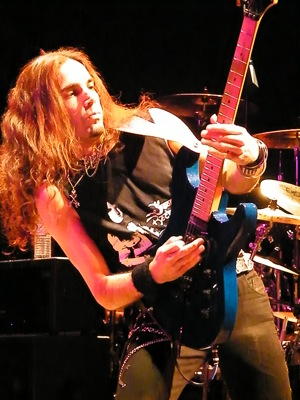 At 8 o’ clock, Boston MA-based guitarist Ethan Brosh came out with his band as the opening act for this show. They played an all-instrumental 40-minute set, and as the set went along, Ethan seemed to grow in confidence and the crowd started warming up to him. I didn’t understand why Yngwie’s mic stands were up on stage while Ethan’s band was playing. It made no sense at all and was unnecessarily obstructing the view of some audience members and photographers. Anyhow, the thing I liked most about Ethan’s performance was that he wasn’t trying to show off too much of his guitar skills, and wasn’t really trying to compete with or match up to Yngwie. It was very much his own thing, with a clear structure in the songs that highlighted the solos. He had his individual moments obviously, but I was digging the manner in which he combined with his sister Nili Brosh on guitar as well. I thought she kicked ass on the rhythms and dual leads with her beautiful red Ibanez guitar, and may be they should do more of the dual lead stuff in their music. It sounded great and was fun to look at. Towards the end of the set, Ethan sat down on the edge of the stage and really expressed himself on the guitar piece he played in that position, after which they closed out the set with the song ‘Downward Spiral’ which features George Lynch on its studio recording and music video. Ethan will be putting out his new album ‘Live the Dream’ later in the year, to feature David Ellefson and mixed by none other than Max Norman. As you can tell, this guy has contacts, but he sure has the talent to back that up.

At 9 o’ clock, surprisingly right on schedule, the curtains were drawn apart and it was time to witness not only a guitar-oriented performance, but an exhibition of sorts. The Yngwie wall of Marshalls was the first thing we saw, then the man himself appeared on stage in his shiny black full-sleeved shirt, shiny black leather pants, high-heel boots and tons of jewelry on. His entrance was so grand, as if a God-like creature had appeared in front of us. The guitar nerds in the audience started losing their minds. He took up at least three-fourths of the stage as his vocalist/keyboardist, bassist and drummer were all hopelessly crammed into the other corner, at least 10 feet away from Yngwie. Then he ripped into his Fender Strat with the Ferrari symbol on the back, and didn’t stop for the next 100 minutes. 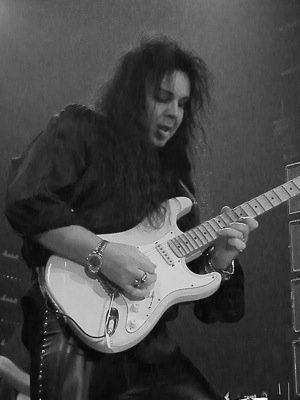 Aside from the million-notes-per-minute guitar play, he is well known for his cheesy, over-the-top stage moves. As it was mentioned several times during the set, he has a book out called ‘Relentless’. I just hope he has talked in the book about how he developed these stage moves, because it’s his thing, only he can pull it off and anybody else trying to imitate him would look absolutely stupid. The tip-toe dance across the stage while playing the guitar, the kicks, the kneels, and the guitar twirls are just some of his moves. He is the true maestro of spazzing out while playing guitar, and he demonstrated that in plenty last night. Besides that, who can match his pick-throwing skills? No one. He throws out at least five picks during each song, and he seems to have even perfected the art of kicking out picks and throwing them from between his legs. He must carry thousands of picks for a full tour like this. His stage assistant probably is the hardest working roadie I’ve ever seen, having to catch Yngwie’s guitar when he throws it after each song, and constantly placing new sets of picks on the mic stand. Yngwie gesturing to him to put on new picks while still perfectly playing his guitar parts right was one of the absolute hilarious highlights of the show, and I had to commend Yngwie on his multi-tasking.

Talking of his guitar-playing itself, I honestly got tired after 45 minutes of his set because he kept on doing the same thing over and over. You really can’t do much other than stand still. You can’t head-bang to that music, air-guitar is too hard, you can’t jump or dance either, so it can get tiring. Whenever he did change it up though, it was great to hear, like the two occasions when he brought out the classical guitar, and the very few times when he actually held down a note long enough for us to hear it distinctly. When he holds a note like that and looks skywards, that’s a classic pose and I have no idea why he doesn’t do more of that as opposed to the wiggling around. He has the strength in his fingers to make single notes sound better than what most other guitarists could. The man has so much talent in the neo-classical genre of music, I just feel disappointed to see him overshadow it with the ridiculous showmanship.

Even the few songs that were supposed to be the standouts in this overtly long set, like ‘Far Beyond The Sun’, ‘Black Star’ and the Rainbow cover ‘Gates Of Babylon’, he effectively ruined their impact by excessive soloing. I appreciate improvisation in live renditions of songs to a certain extent, but not when the song loses its identity in the process. For example, we had to wait for more than five minutes of his soloing to be done before we heard the final chorus in Gates Of Babylon! Not the right way to do it, in my opinion. The drum solo by Patrick Johanssen was also pointless, and the bassist Ralph Ciavolino trying to spew jokes while Yngwie took breaks in between songs got old pretty quickly. Even though I would have preferred seeing Tim Ripper Owens as the vocalist any day, I did enjoy the performance of the vocalist/keyboardist Nick Marino, and his vocals on Gates Of Babylon reminded me a lot of Russell Allen.

Despite its fair share of negative aspects, Yngwie’s performance was undeniably entertaining. When you’re seeing Yngwie Malmsteen, you can revel at the good bits and laugh at the bad ones. He hasn’t changed his appearance, guitar-playing style or stage persona in any way whatsoever during the past five years, and to me it’s clear that he never will. The poster for this North American tour says in bold letters ‘Come See The World’s Greatest Guitar Player’. I’m not sure that he is, and it’s a very subjective thing, but he sure is one of the world’s most unique guitar players, and last night’s show dispelled any doubts about that.