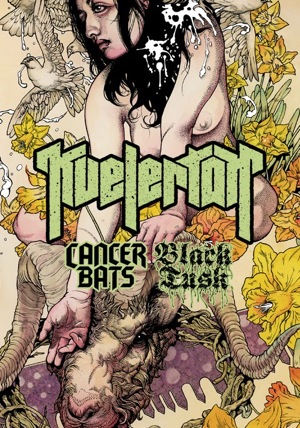 May 8th 2013, The Roxy Theatre, Hollywood CA: Following the release of their sophomore album ‘Meir’, rapidly rising Norwegian extreme metal/rock outfit Kvelertak are currently bringing their tour to North American audiences, and made the inevitable LA stop of the tour at the Roxy Theatre in Hollywood last night. Cancer Bats and Black Tusk were the support acts, along with local openers Killing California. When I first heard it, I really thought Kvelertak’s newest effort is a stellar release and would go down well in the live setting too. The album has maintained its impact over repeated listens, and I was about to find out whether or not it holds up in the live setting in the manner I expected it to. Despite the fact that all three of these bands tour so actively, strangely enough I’d never really seen them before. So this night promised to be an entirely new experience altogether.

I missed out on Killing California’s set, unfortunately, as I was busy with my Cancer Bats interview at the time. But I entered the venue perfectly in time for the start of Black Tusk‘s set. This Savannah, Georgia based sludge trio instantly tore up the stage and got the crowd moving. Their 30-minute set can only be described as full-on intensity to the maximum, so much so that their drummer broke one of his drums. That’s how hard he was smashing them. I initially imagined there’d be a great divide in the crowd between fans of each of the three bands, with the ‘bearded heshers’ (as Cancer Bats frontman Liam Cormier described them in my interview) sticking to Black Tusk. But everyone in general seemed to have a great time during Black Tusk’s set, and enjoyed basking in the band’s monstrous wall of sound. I guess when the music’s heavy, loud and simple, you can’t really ask for much more than that as a heavy metal fan. In all a  great set by Black Tusk, and I look forward to seeing them many, many more times in the near future. 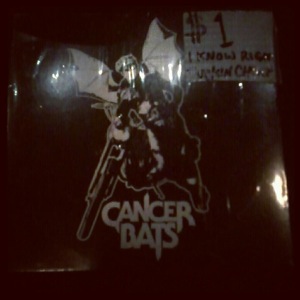 After a very short interval, the mighty Cancer Bats stormed this Roxy stage with their no-holds-barred performance. I’ve liked what they’ve done musically on their studio albums thus far, and I was glad to see them play here as the main support act. They got a hefty 45-minute set, and to be completely honest, I wished for it to continue for much longer than that. Their set was just so much fun, it was a bit upsetting to see it end. They don’t exactly fit with either Kvelertak or Black Tusk in terms of the musical styles, but the sheer energy and oomph of their on-stage show is more than sufficient to make up for that. Besides their dynamic frontman Liam Cormier, they have an excellent group of musicians to collectively create a juggernaut. I’ve always associated Cancer Bats’ image with Liam, but after seeing them last night I now know how crucial guitarist Scott Middleton is to their sound. The dude shows how to use the pinch harmonic the right way. Zakk Wylde could take a lesson or two. Besides their killer set, Cancer Bats have a lot of other things to offer on this tour, like their merch. I bought a $1 CD from them which has a bunch of cover tunes and music videos. Spending a dollar can do no harm, can it?

At around 10 minutes past 10, the curtains raised for one final time and Kvelertak hit the stage with the first two songs off of Meir. It was a great way to introduce the new music to the audience, in the process also building up for the older material which was sure to make the fans go apeshit. As expected, the song ‘Mjød’ from the debut album did just that. The jumping, dancing, head-banging and moshing started and pretty much every single person in the crowd was doing something or the other, anything but standing still. Following Mjød was ‘Fossegrim’. Every band has that one song which is most awaited by fans, the one song which draws the best response. For Kvelertak, that song is certainly Fossegrim as was evident from the madness level of the crowd while it was being playing.

But aside from that, there were highlight-worthy moments throughout their 60-minute set. Amidst the crazy, fast and heavy tunes, I really enjoyed the song ‘Evig Vandrar’ from the new album, with its softer acoustic guitar-like vibe and slower tempo which got the crowd to clap along. On a headline tour such as this, they were able to give us a fair chunk of their 2-album discography, with as many as 14 of the 23 songs played. Of course, the older songs still drew the better responses from the crowd, but I’ve got to say the new material went down well too. In addition to nailing down the music, the band’s interaction with the fans was top-notch, specially that of the singer Erlend Hjelvik. Several times during the set, he dived into the crowd and continued singing while surfing on top of them. The fans took perfect care of him by passing him along back to the stage safely enough for him to leave the show completely unscathed. But the entire time I was watching his on-stage persona, he reminded me of the Valient Thorr dude, a band that has been around for much longer than Kvelerta, and I was thinking to myself, ‘Damn, he stole Valient Himself’s moves!’

All in all though, it was a mighty impressive set by Kvelertak. The last time they did a headline show in LA, if I remember correctly it was at the Echoplex. They’ve made the big leap to headline the Roxy now, and it’s all purely because of the music, properly legit with no gimmicks involved. The three-pronged guitar attack sounded big and sweet, plus stand-in drummer Jay Weinberg did a fine job too. The band’s black metal elements on some of the newer songs shone through as well, and Weinberg had a big role to play in that. Last night marked a successful LA return for Kvelertak, without a doubt.