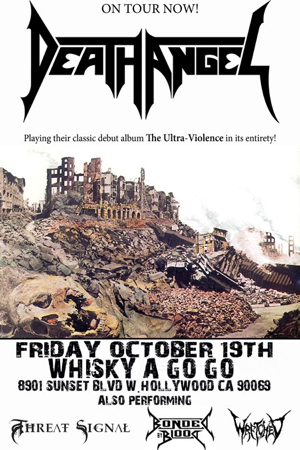 October 19th 2012, Whisky A-Go-Go, Hollywood CA: A Death Angel concert is an experience like no other. As embarrassing as it is to say this, I had nearly forgotten what an astonishing show this band gives every night. One of my favorite shows that I’ve ever attended was a headlining date from Death Angel at Slim’s in San Francisco in February 2011. At that show I saw nothing but pure joy emanating from a group of road warriors who had finally come home to an audience that loved and missed them. It was also at that show that I had the pleasure of meeting the heart and soul of Metal Assault, Mr. Aniruddh “Andrew” Bansal. On this Friday night at the Whisky in Hollywood, Death Angel once again delivered a sensational and transcendent performance that somehow managed to match the magic of that San Francisco show. This was thrash metal in its purest and rawest form, played by one of the best live acts in the genre.

I arrived in time to catch two of the local openers before the touring package, Samarium and Velosity.  The former played a style of groove thrash that just wasn’t my cup of tea to be honest, while the latter focused on tech-thrash. I actually really enjoyed Velosity’s tight precision riffing, though it didn’t translate to songs that were more than okay. Many of the songs focused on long instrumental passages or extended guitar solos, and they just weren’t varied or interesting enough to hold my attention. Both are young bands with room to grow and change; in Samarium’s case, they need to tighten their playing and write stronger songs while I feel that Velosity simply need to arrange their already killer riffs in a more diverse and varied fashion, with more beats to offer than the standard thrash 2/4.

First among the touring acts was San Francisco’s Potential Threat. It’s no secret that I typically don’t enjoy so called “groove metal” bands, but Potential Threat proved to be a rare exception. Instead of playing what tends to be straight plagiarism of the Dimebag Darrell riff library, Potential Threat offered driving downtuned riffing, gang-vocal choruses and occasional speed burst borrowed from hardcore punk. The primary complaint I have with groove metal bands is that the songs often sound the same and don’t change the tempo, but Potential Threat offered a breath of fresh air in that regard. Guitarist and frontman Mike Noble had a strong stage presence- one could definitely tell that he had been playing this style of music for decades. Potential Threat proved to be great opener for Death Angel even though they weren’t a purely thrash act, and I really look forward to seeing them again when I return to the bay.

Sadly, the show took a turn for the worse with Canada’s Threat Signal taking the stage. Now I’m the last guy who should be reviewing a technical metalcore band, but I ultimately feel that Threat Signal were a poor choice to support an act like Death Angel. Sure the band’s playing was solid and singer Jon Howard was an energetic and active presence, but their modern metalcore sound was just not what all the thrash fans in the house wanted to hear. I’m sure they would have succeeded on a bill befitting their brand of metal, but Threat Signal simply didn’t belong at this show.

The wait for Death Angel to go on felt like forever. Luckily fans on the floor were treated to a round of classic Judas Priest and Iron Maiden over the P.A. Before long though, the band came out and commenced their performance of the entire The Ultra-Violence record. Within the first seconds of “Thrashers” I remembered what an amazing live act Death Angel is. When it comes to stage presence, there isn’t a thrash band out there that can collectively match Death Angel, member for member. More than any other of the original thrash acts, Death Angel continues to play every show like they have something to prove. Mark Osegueda’s voice has aged like a fine whiskey- his melodic ability hasn’t diminished, but he’s added a very cool rasp to his arsenal. He could constantly be seen leaping about, banging his long dreads back and forth or high-fiving fans in the front- when it comes to thrash metal frontmen, there are few that can match Mark. Rob Cavestany, Ted Aguilar and Damien Sisson were no slouches either though, and were constantly trading places onstage, headbanging or leaping off of Will Carroll’s drum riser.

Death Angel’s full performance of The Ultra-Violence proved to be far more exciting than I could have ever hoped for. It helped that much of the album was ignored on their last headlining run, so getting to see songs like “Kill as One” and “Voracious Souls” for the first time was about as good as it gets for a Death Angel fan. The highlight of the entire set had to have been their full performance of the title track to The Ultra-Violence however. Seeing the band pull off that eleven minute instrumental with precision and ease was nothing short of awe-inspiring, and the packed Whisky offered a deafening roar upon the song’s conclusion. Death Angel also made sure to have some fun with the final song of the album, “I.P.F.S” by throwing in random riffs during the song’s breaks (my favorite was Damien’s take on “Axel F” from Beverly Hills Cop).

After an encore break that felt just a bit too long (three chants for the band made their rounds), Death Angel finally returned for a surprisingly meaty career spanning second set. The three tunes played from Relentless Retribution were as great as the last couple times I heard them with “Claws in So Deep” once again forcing me to bust out the air drums and ruin my poor neck. By this time, Mark was noticeably drunk but his performance remained unhindered. In fact, the celebratory shots of Jagermeister that the band took only added to the goofy and happy vibe that this second set had. Sure, rocking out to “3rd Floor” and “Seemingly Endless Time” was fun but what I really loved was the eighties jam session that they all took part in. A few short covers were done, including Ozzy’s “Believer” and a downright scorching rendition of “Dynamite” by Scorpions (Death Angel are crazy if they don’t record a version of that song). Mark and Rob were constantly cracking jokes during this set, but they soon became all business for the final chaotic minutes of “Thrown to the Wolves.” Crowd surfers were in abundance, and Ted even made a trip to the floor to take part in the ensuing madness. It had been a full two hours since Death Angel had taken the stage, and in that time I had gotten knocked on my head in the pit, destroyed my voice by singing along with every song, and abused my neck headbanging for every second. I’ve never been so happy to wake up the next morning with a cracking voice and an immobile neck.

Ultimately, it didn’t matter that the opening acts were mostly incapable of warming the crowd up for Death Angel. Every fan in the Whisky was lucky enough to witness a two hour marathon of the best live thrash they will hear all year for only a little over 20 dollars. Every member gave their utmost effort in giving us an astounding performance, and the songs offered were of uniform greatness. Would I have liked to hear “Lord of Hate” along with all the other songs performed? Sure- but to ask any more out of the show I got to see on Friday night would be nothing but spoiled greed on my end. Right now, all I feel is envy for my friends in the bay that will get to take part in what is sure to be a massive thrash spectacle in Oakland next week. It’s going to be a long wait to see a show this spectacular again, a wait that will probably only be satisfied by another Death Angel headlining show. 2013 can’t come soon enough.