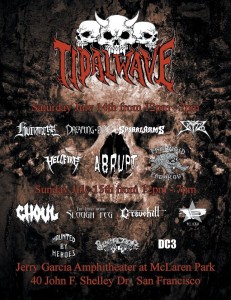 July 15th 2012, Jerry Garcia Amphitheater, San Francisco CA: Nearly every dedicated heavy metal fan has dreamed of visiting Europe to attend one of the legendary summer festivals like Wacken, Download or Sweden Rock. For over a decade, the Tidal Wave Festival has annually provided the Bay Area with the closest thing to those European festivals that we’ll probably ever get. For thirteen years, Tidal Wave has provided the Bay Area with two days of free world class heavy metal. That’s right, not only does California have an annual open-air metal festival, but it costs nothing to attend. This year, the show has once again proven itself as one of the best experiences a metalhead can have here in the Bay Area, and I for one, am already excited for the next edition of Tidal Wave.

Sadly, I was only able to attend the second day of Tidal Wave, but this day of music was enough fun to stand as one of my favorite music events of 2012. I arrived at the festival just in time for Haunted by Heroes, an old-school heavy metal act (think AC/DC, ’80s Priest and Armored Saint) made up of some of the youngest musicians you’ll probably see play on a heavy metal stage. These kids’ technical prowess was definitely impressive, and guitarists Charley Haunted and Max Haunted have way more energy onstage than most acts, but I have to admit that I just didn’t enjoy their songs too much. It’s wonderful that these guys are out there playing heavy metal at such a young age, but if Haunted by Heroes want to be genuinely appreciated for their music and not simply for their youth, then they might want to avoid writing songs where the chorus consists of “Rock!” shouted gang-vocal style. Despite my personal opinion on the band though, much of the older crowd loved Haunted by Heroes, and were certainly upset when the band’s set was cut short due to time constraints.

Tidal Wave takes place at the small Jerry Garcia Amphitheater at McLaren Park in San Francisco. Throughout the amphitheater there were a number of merchandise booths to be found; some of the goodies offered included CDs and rare vinyl, shirts, patches and other apparel from ChopoBrujos, and even women’s heavy metal clothing from Indecent Designs- both local Bay Area merchants. Fans brought their entire families to the event; small children could frequently be seen running around the lawn and climbing trees, and many groups even set up small picnics so they could kick back with their food and beer while the metal blared through the air. If one wanted, they could get up front and mosh with the younger folks in attendance, or they could just relax and hang out for the whole day. Musicians playing the show could be seen mulling about the audience, and it wasn’t an uncommon to see young fans greet their heroes right as they jumped off the barely elevated stage. I truly loved the warm, welcoming and laidback vibe that the whole show gave off; it’s something that I hadn’t experienced since I attended the last Tidal Wave Festival in 2010.

The next artist to play was D.H. Peligro. Although better known for being one of the originators of hardcore punk as the drummer for the Dead Kennedys, Peligro’s band (featuring himself on guitar and vocals) played an eclectic mix of musical styles. Any one song could have raging crossover thrash verses, groove metal choruses, a reggae bridge and atonal soloing from Peligro. Even though those elements sound like a recipe for disaster, the songs were surprisingly successful in my opinion. Peligro’s energy was also great to see, when he wasn’t on the mic singing he would try to stay in motion on the small stage. It was a fascinating set, one that the audience hardly seemed receptive towards. The crowd was sadly very inactive during this set, despite the consistent heaviness offered by Peligro. Despite this, I still enjoyed their half hour onstage, and I’d be happy to check out more of their music if I could find more than just live videos on YouTube.

The next band was the first to gain a noticeable reaction from the young crowd attending Tidal Wave. Gravehill, a newer retro death metal act, have already been pleasing audiences in Southern California for a few years now, and this visit to the Bay Area could certainly be considered a successful one. A small pile of fans gathered about the front area for the first time in the day, and the pit was in action as the band opened up with “Unholy Executioner.” Even though Gravehill’s blood makeup came off as a little silly, they luckily didn’t take themselves too seriously. Lead growler Mike Abominator was an effective frontman, making plenty of crass jokes in between songs and making sure to interact and head bang with the fans in front. After bearing witness to far too many new death metal bands trying too hard with over the top stage antics and massively downtuned chugging, I was happy to see a young band play old-school death metal and have some fun with it.

The second to last band on the Tidal Wave bill was Slough Feg, the best San Francisco heavy metal band that far too few people have heard of. For over fifteen years, Slough Feg has supplied some of the best traditional heavy metal around, and their many albums are consistently fantastic. I’ve been waiting to see this band for years, but they insist on playing bars and other 21+ venues as of late. This was their first all-ages show in who knows how long, and I certainly had no intention of missing this opportunity. Their set was more than worth the trek to San Francisco however, and I truly hope that I’ll get to see the band play live again sooner rather than later. Guitarist Angelo Tringali and bassist Adrian Maestas were skilled players in their own right, but they were ultimately a backdrop for Mike Scalzi, easily one of the most outrageous and entertaining frontmen I have ever seen. The man was constantly having fun with the few kids in the front, making sure to play his guitar solos right in front of the fans’ faces, and even underwent some outfit changes just for the hell of it. Mike was clearly having a great time onstage (his signal to drummer Harry Cantwell to play an improvised cover of Judas Priest’s version of Diamonds and Rust is just one example of his hearty attitude), and even if he sometimes failed to return to the microphone in time to hit his vocal lines, it really didn’t matter in the end. Slough Feg’s set effectively covered the last ten years of their career, and for fans who had never heard their music, it was a great introduction to the band. The set smartly strayed from their faster and heavier songs, and instead focused on their more NWOBHM-influenced tracks. Songs like “The 95 Thesis” and “Traders and Gunboats” allowed them to show off their Iron Maiden and Thin Lizzy-inspired material, and I think that anyone with an appreciation for classic early metal would have found something to like about Slough Feg’s set.

The final band of the day was another group hailing from the Bay, Oakland’s Ghoul. I came in knowing that these guys gave pretty over the top live performances, but I truly could not have anticipated the madness that I would see. By this time, a large group of fans had gathered in the front area of the amphitheater, and they kept a circle pit going throughout the whole 45 minute set. Ghoul began modestly by coming out in costume and opening up with the “The Lunatic Hour” and “Off With Their Heads,” but the shenanigans weren’t too far off. Between every song, either Digestor or Cremator would make sure to throw in some politically incorrect line, and for the most part their stage banter was pretty funny. My favorite was their jab on the Catholic Church- “Your religious institutions have failed you! Now we offer you another way, with 20% less child rape!” Some of the visual antics included a fake chicken being decapitated, a few gallons of blood and guts being piled on the audience, and of course, an appearance from the Killbot for “Rise, Killbot, Rise!!!” The band primarily focused on their latest album, “Transmission Zero,” but a handful of cuts from “Splatterthrash” were thrown in as well. The three axemen onstage refused to remain very still throughout the set, which certainly fit with their evil, yet ridiculous image. Ghoul offered a fun, goofy set of thrash (how seriously can you take a bunch of guys wearing rucksacks on their head after all?), and I know the mass of people beating each other up in the pit were enjoying every minute of it. This set was a great way to end a truly fun day, and cap off yet another successful year of the Tidal Wave.

Even though crowds at Bay Area concerts have dwindled over the years, shows like the Tidal Wave Festival are the proof that there are metal fans out here that truly love and support the scene. Years ago Ross Sewage and Sean McGrath opened Tidal Wave with their original band, Impaled, and now in 2012 they headlined the show with Ghoul. I’m proud to be a part of a community where artists can grow, be supported by their peers and ascend the ladders of respect and success, even if it’s a slow climb upward. At no other show will one find a sense of brotherhood and kinship like the one offered by the Tidal Wave, and I know I’m going to have to wait until next year’s edition of the festival before I experience it again. The Tidal Wave certainly isn’t anything like a massive European festival like Wacken or Download- it’s something more intimate, communal and personal- it’s something better.

Notes: Unlike many free concerts, the bill at Tidal Wave was actually pretty focused. Compared to other free shows that I’ve attended, like the ones put on by Scion A/V in Los Angeles, the acts were not very disparate in their styles of metal played, and I found that most open minded heavy metal fans could at least find something to like about all of the bands that played the festival.