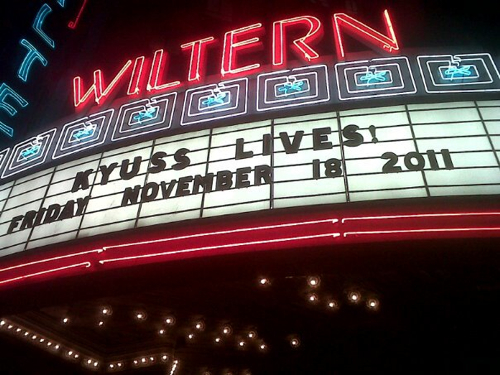 Nov. 18th 2011, The Wiltern, Los Angeles CA: In late 2010, Kyuss announced their return to touring for the first time in 15 long years. They started touring under the monicker “Kyuss Lives!”, with Bruno Fevery replacing Josh Homme on guitar. After doing a European tour in November of that year and other territories worldwide this year, they did a North American tour with support from The Sword and MonstrO. This tour came to an end at the Fox Theatre in Pomona, on October 8th. The performances of the bands were great, but that show left a lot to be desired because of the horrible bass-heavy sound mix the venue had that night. Even though the evening was completely ruined, I was glad to know that the second leg of the tour was due to start soon.

After kicking off this second leg at San Diego’s House Of Blues, Kyuss Lives were back home to perform at the Wiltern in downtown Los Angeles last night on November 18th, once again with The Sword as main support, but this time with Black Cobra as the other support act. Los Angeles-based rock ‘n roll trio The Shrine were also on the bill, only for tonight. After that forgettable Pomona experience, I was hoping for a better show this time. It was not just better. It was perfect.

The Shrine promptly hit the stage and impressed one and all with their 25-minute set. That seemed like the shortest 25 minutes of my life, simply because of how awesome they were. Time really does fly by when you’re having fun. If you’re unfamiliar with the band and looking for a description of their music style, all I can give you is rock ‘n roll. That’s just how pure and unadulterated they sounded. I seldom get to hear the sweet, classic sound of the Fender Stratocaster at hard rock/metal shows these days, and I would like to thank guitarist/vocalist Josh for giving me a refreshing taste of it. I heard their music through the demos they put out on the internet, and it sounded even better in a live setting. They did not seem overawed by the fact that this was the biggest stage they ever performed on in their lives so far. They didn’t go crazy trying to move and jump around all over the place either. They did what they would normally do on any other stage, to concentrate on playing the music right but at the same time interact with the crowd to keep things interesting. The Shrine impressed me so much last night that I would say they are one of the best bands I have seen all year long. Along with Danava, Holy Grail and Skeletonwitch, they are now one of my new favorite bands. A very enjoyable set indeed.

The Sword were up next, and just like The Shrine and Black Cobra, their set almost seemed like a breeze, even though they played for nearly 40 minutes. Thankfully, I could actually hear the guitars, vocals and drums this time, because I heard none of those in Pomona. Having opened for bands like Metallica and most recently Guns ‘N Roses on some of the biggest stages in the world, these guys have become complete professionals as live musicians. Whenever they are on stage, everything just clicks, and they sound perfect (venue’s sound mix permitting). As an opening band and even as a headliner, The Sword’s stage setup is pretty basic, and they truly express themselves through their music alone. Tonight was no different, as they provided a great representation of their catalog by playing songs from all three studio albums, with slightly more focus on the latest album “Warp Riders”. This solid 40-minute performance left me hungry for more from the band, and I eagerly await their next studio album and headline tour, hopefully sometime next year.

The wait for the headline act wasn’t very long, and as scheduled, the lights went out at 10 minutes past 10, and the huge Kyuss Lives backdrop descended down to take its place on the stage. The band members appeared one by one, grabbed hold of their instruments, and wasted no time in kicking off their set. Among the many things I liked about their performance tonight, one of the most endearing qualities was the sheer amount of music they played for the 2 hours and 15 minutes they were on stage. There was no time-wasting whatsoever, and besides a hello and a thank you, there was no talking from frontman John Garcia. Unless it’s Bruce Dickinson or Rob Halford, I always hate it when singers keep talking in between songs, and I simply prefer them just singing.

I was delighted to be able to hear Bruno Fevery’s guitar, and he did an amazing job at playing each and every song. In fact, it was hard for me to shift focus to any of the other members with Bruno putting on such a mesmerizing performance. Having said that, his band mates were equally great. Garcia sounded perfect on vocals the entire time, despite the unusual length of the set. And to add further punch to their sound, Nick Oliveri and Brant Bjork kept the rhythm section strong throughout. They seemed to generate maximum output with the minimum of effort.

At 11.25, about halfway through the set, they took a momentary break. Scott Reeder appeared in place of Nick Oliveri, among huge cheers from the crowd, and stayed on stage for a decent while, laying down the bass on the next four songs. For the last of these songs, “N.O.”, they were also joined by guest guitarists Mario and Dino Lalli from the band Fatso Jetson. The rich sound created by the combination of these guest musicians was one of the highlights of the night. The guests then left the stage, and Nick Oliveri was back on the bass for the remainder of the show.

As for the set list, you couldn’t possibly have asked for more as a Kyuss fan. They played 21 songs, which is a lot considering the fact that they have only four studio albums worth of material. When I read the initial announcement about the extended two-and-a-half hour set, I had my doubts about how it would turn out. But all my apprehensions were squashed by their selection and ordering of songs. They managed to keep the audience’s attention for the entire time, and made it worth everyone’s time and money.

All in all, based on this show, I have come to the conclusion that Kyuss Lives is the ultimate desert rock band you will get to see, and it only surprises me when I think about the average size of venues they are playing on this tour, because their music blends all the elements that should earn them a worldwide appeal, including the United States. They deserve to play in sold out arenas and stadiums, not half-empty mid-sized theaters. You can check out the remaining tour dates here, and once you see Kyuss’ show, you will definitely agree with me. It was indeed a fantastic evening from start to finish.