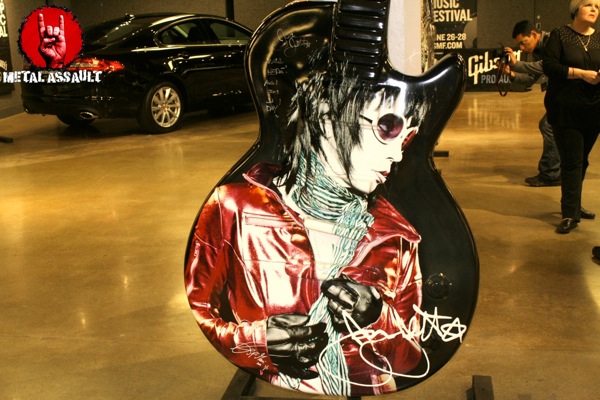 For the past three years, the Sunset Strip in West Hollywood has been decorated at various historic venues and strategic points with 10-foot tall guitar art sculptures that instantly catch the eyes of locals and tourists alike. These beautiful pieces or art constitute the ‘Gibson GuitarTown’ series, an endeavor by the Sunset Strip Business Association and Gibson Guitars to honor the achievements of various musical personalities who’ve had an influence on the Strip in some way, shape or form. Gibson GuitarTown launched with its first wave in 2010, followed up with a second wave the year after, and is about to bring an end to its third wave of 2013-14 with a charity auction of the guitars on Friday February 21 at the Bonhams auction house in West Hollywood.

Gibson GuitarTown 3 features art honoring the likes of Joan Jett, Alice Cooper, Janis Joplin, Blondie and ZZ Top, designed and painted by various high-profile artists. The highest bid in the 2013 auction for the previous wave was a whopping $17,000, and this year’s auction promises to raise the bar even further. Proceeds from the auction will go to the Music For Relief non-profit organization, founded by members of Linkin Park. These guitars were on display last Wednesday February 19 at Bonhams for a private media reception, and some of the artists were on hand to discuss their respective pieces. Metal Assault caught up with Stacey Wells, the proud artist of the Alice Cooper ‘Welcome To My Nightmare’ guitar. 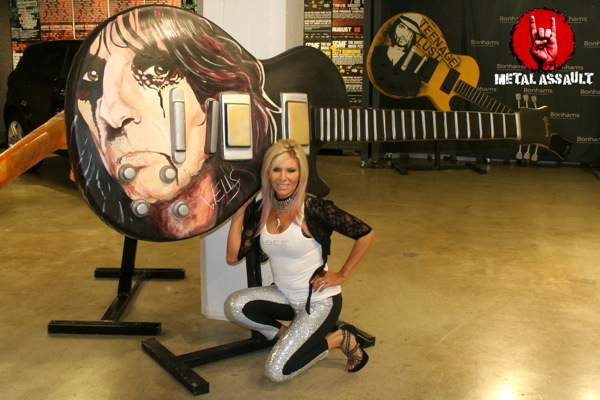 Upon being asked how she got solicited to do this particular guitar and why she chose Alice Cooper for the piece, Wells said, “Every year I do a show on the Sunset Strip called ‘Reflections Of The Strip’, and I paint musicians that have made it big on the Strip, along with some local musicians who’re making their way on the Strip that aren’t may be all that famous yet but are really awesome. So it’s a really cool show and everybody comes out, and I guess on the internet, people saw all the pictures of the paintings that I did and they just loved them. So they asked me to do a guitar for this and told me to do someone that represents the Sunset Strip. So I just thought of Alice Cooper. What I love about the Strip is the rockstar looks and the guy liner, and he’s just such an unbelievably hard worker. His performances are killer and I thought that’s what the musicians on the Sunset Strip are like. So that’s why I chose him. He’s the epitome of the Sunset Strip”

Speaking of some of her other work, Wells recalls, “Actually recently I did Steven Tyler, that was hanging in a gallery in Hawaii, and he ran into it. He loved it so much that he took it home from the gallery and it’s hanging in his bedroom now! So that was pretty cool. But I’ve also done Led Zeppelin, Mötley Crüe and some of the local bands like Love And A .38 and Run Devil Run, and lots more!” 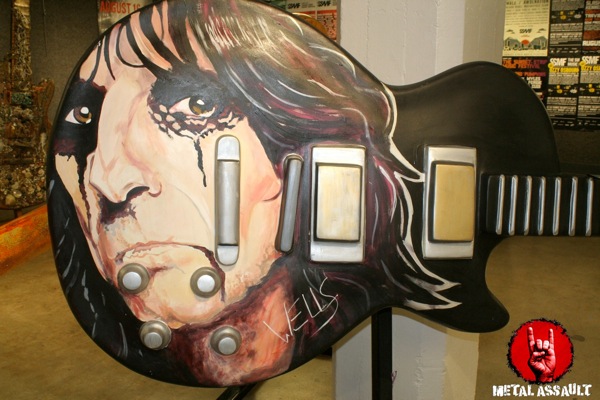 On the design of the Alice Cooper guitar, Wells elaborates, “Of course you have the shape to work with. So it eliminates a lot of things, but I wasn’t sure because you can do them standing up or down so I just did out some drawings, drew a picture of the guitar and drew stuff on it. I saw what looks good and when I found one that I thought looked good, I drew it right on the guitar and then hand-painted it. I think it looks better like this (horizontally) because it has a little more space for the Alice Cooper face. And I also did a snake that wrapped around it too and it might not have made it through the transportation or something, but it was pretty cool (laughs).

Has Alice Cooper himself seen this guitar? “Not as far as I know”, says Wells. “But he did sign a picture of a different painting that I did, and I sent a picture of the guitar to him back then, so I guess he has seen what the guitar looks like, but not in person.”

Check out a photo gallery of Gibson GuitarTown 3 below (view the photos here if you’re on a non-Flash device):

For more information on the auction:
bonhams.com/auctions/21959