Through the past eight years, San Francisco Bay Area thrash metal giants Testament have gone from strength to strength, in a manner perhaps no other band has. The 2008 release ‘The Formation Of Damnation’ was by all means a triumphant comeback album, and they followed it up with the stellar ‘Dark Roots Of Earth’ in 2012, the two albums and their respective touring cycles re-establishing Testament’s stronghold on the genre they’ve now pursued for more than three decades. On October 28th 2016, they released their eleventh full-length ‘Brotherhood Of The Snake’ on Nuclear Blast, an album that well and truly crowns them kings of thrash, with every song a winner on its own and the album on the whole standing out far and above all other new releases, including those by Testament’s ’80s thrash contemporaries. Currently nearing the end of a European headline run, Testament are plotting worldwide domination all over again as they ready themselves for the ‘Brotherhood Of The Snake’ touring cycle. Vocalist Chuck Billy recently spoke to Metal Assault to talk about the album and future plans. Enjoy the conversation below, bask in the glory of the new album, and keep your eyes pealed for a show near you.

Chuck, it’s great to have you again on Metal Assault. Based on first impressions of the band’s new album ‘Brotherhood Of The Snake’, I’d say is thrashier than the last couple of albums. Would you agree with that?

Yeah, it’s thrashier. I think when we started the process of writing the new record, we definitely knew we wanted to speed things up a little more than ‘Dark Roots Of Earth’. For one, we wanted to get a bigger drum sound on this one. I also wanted to stick to singing melodically without using a lot of the the death voice. We feel that we accomplished everything we set out for.

That’s interesting, man. What was the reason for trying to get more of the traditional clean singing instead of the death metal growls?

I think the songs were just set up that way. I’ve sat on these songs for quite some time, so as I was hearing them in my head, I had more time to really think about them. It just came out as me not using that other voice as much. At certain times I think it was called for, on some of the songs, but for the majority of it I felt it needed the vocals to be a lot cleaner, and for the singing voice to be really heard. The last album was the first one I tried recording without using a lot of delays, reverbs and slap-backs on the lead vocals, whereas it seemed to be that on the past records before, it got a little washy for me. The last record dried it up and I liked that feeling, so I wanted to go for that approach again on ‘Brotherhood Of The Snake’, but just have it more in-your-face, vocally, without it being washed up and having a bunch of tricks on it. 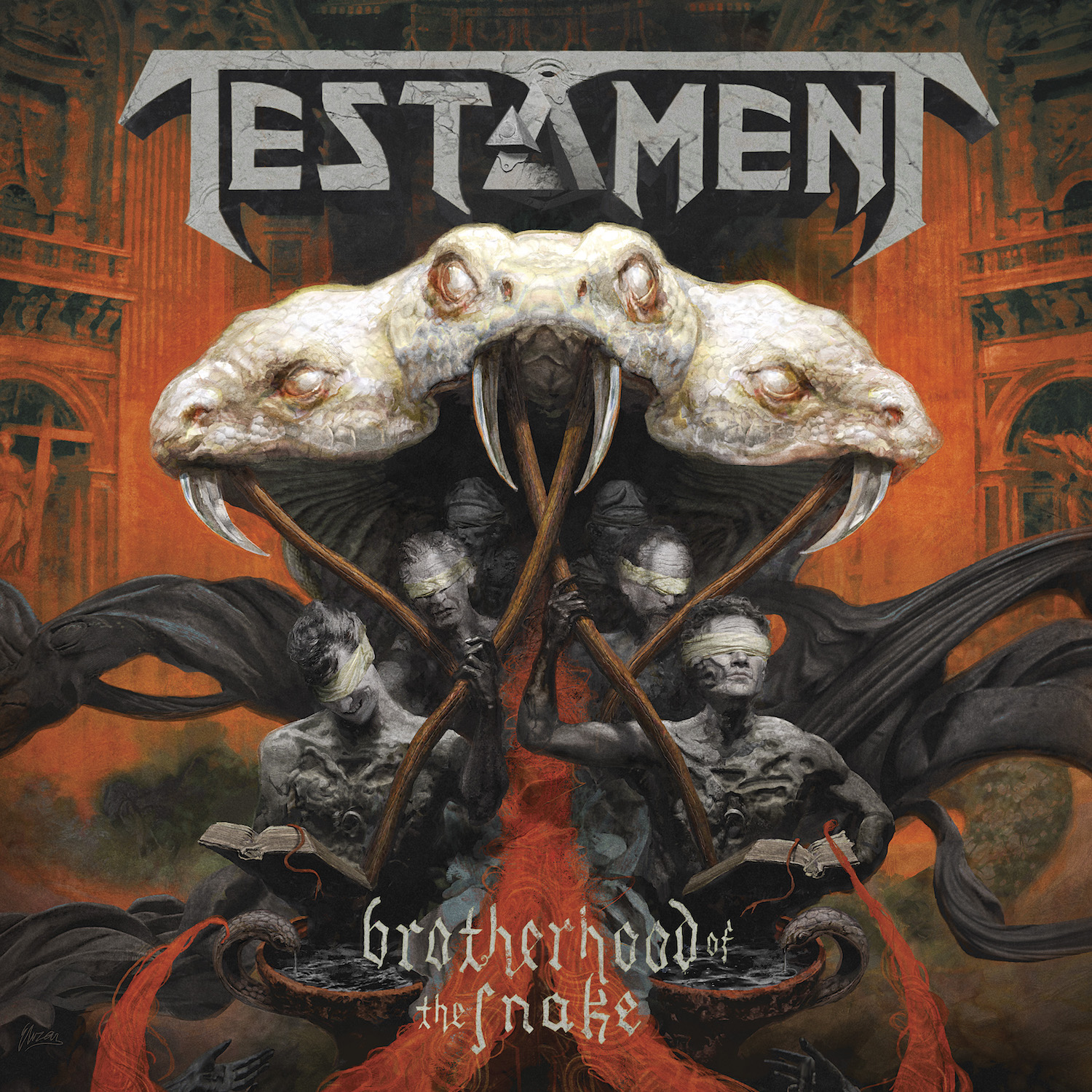 You said you’d been sitting on these songs for a while. I interviewed you more than once in the last two years during the four-year cycle you were on for ‘Dark Roots Of Earth’, and from what you said in those interviews, you’ve been writing these songs for at least two or three years now, on and off.

Two years, probably. Some of them we wrote when we got into the studio, but the majority of the riffs we’ve had for quite some time. It just took a long time to put it all together. I think what slowed the process down was, we had some songs that weren’t completed yet. They didn’t have an ending yet. So, by the time we got into the studio, there was a lot of that going on. But when we got in there, it just kind of pushed and drove everybody to buckle down and get it done, you know.

Every style of music goes through waves of popularity and ups and downs. Thrash is interesting right now, because I feel it’s still a lot of the older bands, if I can say so, are continuing and keeping it alive. Does that also make you hungry to keep it thrashy in your music, because there’s not a lot of other people doing it as much?

I think we just do it because we’ve learnt that in this business you’ve really got to stick with what you do, and we’ve done this style long enough to where we’ve fine-tuned our craft. If we tried to switch our style with something else or get on the bandwagon with what’s current, we’d definitely lose fans and momentum. So, we stick with what we do and this is what we’re probably going to keep on doing.

Right, and these days it’s a four-year time period for you between albums. ‘The Formation Of Damnation’ came out in 2008, ‘Dark Roots Of Earth’ in 2012 and now the new one this year. In the past, of course, it didn’t take as long and you didn’t really need to tour as much, I guess. Do you sometimes miss that era, or do you find it better now with the way you’re working?

Well, in the past era we all lived closer to each other, and getting in the rehearsal room was probably a lot easier. But now it’s a process and everybody doesn’t live near each other. So to rehearse, we have to fly everybody in. So it’s more of an ordeal to work that way now, but we definitely didn’t want to wait four years to release this one. We really wanted to get it out two years after ‘Dark Roots…’, but it just didn’t happen. We know now that we don’t want it to happen like last time and go through a two-year writing process. Hopefully in two years, we’ll have another record ready to go. So, we’re consciously aware of that now. After finishing this record, it was like, “OK, that didn’t happen the way we wanted it to.” So we better start working on new music for the next one now. There’s nothing wrong with that!

Compared to the last one, the one difference is having Steve DiGorgio on bass. He did an album with you back in ’99. I know he’s been in the touring lineup for the past two years, but how was it having him on the recording side of things?

Oh, it was great! Steve is a great bass player and he brought his own style and tone, and we really wanted it to be heard on this record. Again touching back on the way we chose to produce the vocals and guitar drier, it made more room to hear the bass and drums. I think the bass and drums cut through really well on this record, and it’s by far the best drum and bass tone we’ve had, ever. So, Steve coming in, it was great to have him on there, he killed it, and we knew he would.

Testament has also had quite a few drummers over the years. I mean, they’ve all been great, there’s no denying that. But it must be good to have a committed member now, with Gene Hoglan having been in the band for a number of years, and this being his full-time band.

Yeah, I hope so! I mean, we can’t foresee the future, but we’ll always have Gene here, no matter what, as long as he wants to be here. We always try to make everybody comfortable and enjoy the band and organization, as much as we can. Believe me, we’ve been through it enough. We’ve got a good thing now and we don’t want it to end. We have a good band now and I’d hate to see that change, so we make sure everybody is on the same page, and if there’s any problem, we want to get it figured out and worked out.

That’s good to hear. Coming back to the album, as we discussed earlier, it is thrashy, and there are definitely some fast tracks on there. Between fast and slow songs, what do you prefer as a vocalist, in terms of the ease or difficulty in hitting the notes?

Faster tracks are easier because the past is fast and they don’t necessarily lean on melodies as much as it does on rhythmic patterns. So, I can go either way, it all depends and it doesn’t matter to me. When I sing a slower groove and a hook and I have to do a really good job at it, that’s awesome as well. It’s all good. At this point, I try to push myself out of my comfort zones and try to do something that I wouldn’t typically do. On some of the songs on this record that came out fast and thrashy, instead of my normal thing following the bouncing ball and jumping on the same pattern, I tried to sing the opposite case with the melody, against the grain a little bit, and it seems to work. That’s how I did a lot of stuff on this record.

When you guys play live, specially some of the older tracks that you’ve been playing for a long time, is there a little change in tempo, whether it be faster or slower?

Oh, they’re definitely a lot faster than they are on the records (laughs). They just tend to be that way, somehow, specially towards the end of a tour. You start out with one tempo and by the end it’s definitely sped up.

In terms of the touring lineups that you’ve been part of, at least in the US from what I’ve noticed, it’s pretty much been lineups that your fans would like, for example, Exodus, Lamb Of God, Anthrax or bands like that. But do you feel that your music now is broad enough that you can tour with other heavy bands and not just thrash bands?

I think so. We’re at that stage where we can tour with anybody, doesn’t have to be a certain genre. We’ve got a broad enough spectrum of musical styles and we can play with anybody from a thrash band to a heavy rock band.

Aside from the album release and the European tour, what else are you working on right now?

That’s it for now, and we’ll probably do a North American tour in April 2017, and then hopefully get a few of the summer festivals here in America as well as in Europe. So, I’m sure we’ve got a good year-and-a-half to two years of touring mapped out. It’s the beginning of that cycle now, and soon we’ll be off and running (laughs).

At the beginning of a touring cycle, do you still feel the excitement of a new chapter in the band’s life?

Oh, it always does, specially when you do a record. We’ve labored so hard for a year, year-and-a-half to get this record written and recorded. Now that it’s done, the pressure is off and the easy part is to get to go out there and play. It’s like starting over. We’re excited because we feel like it did come out a lot better than we thought, and we’re very proud of it.