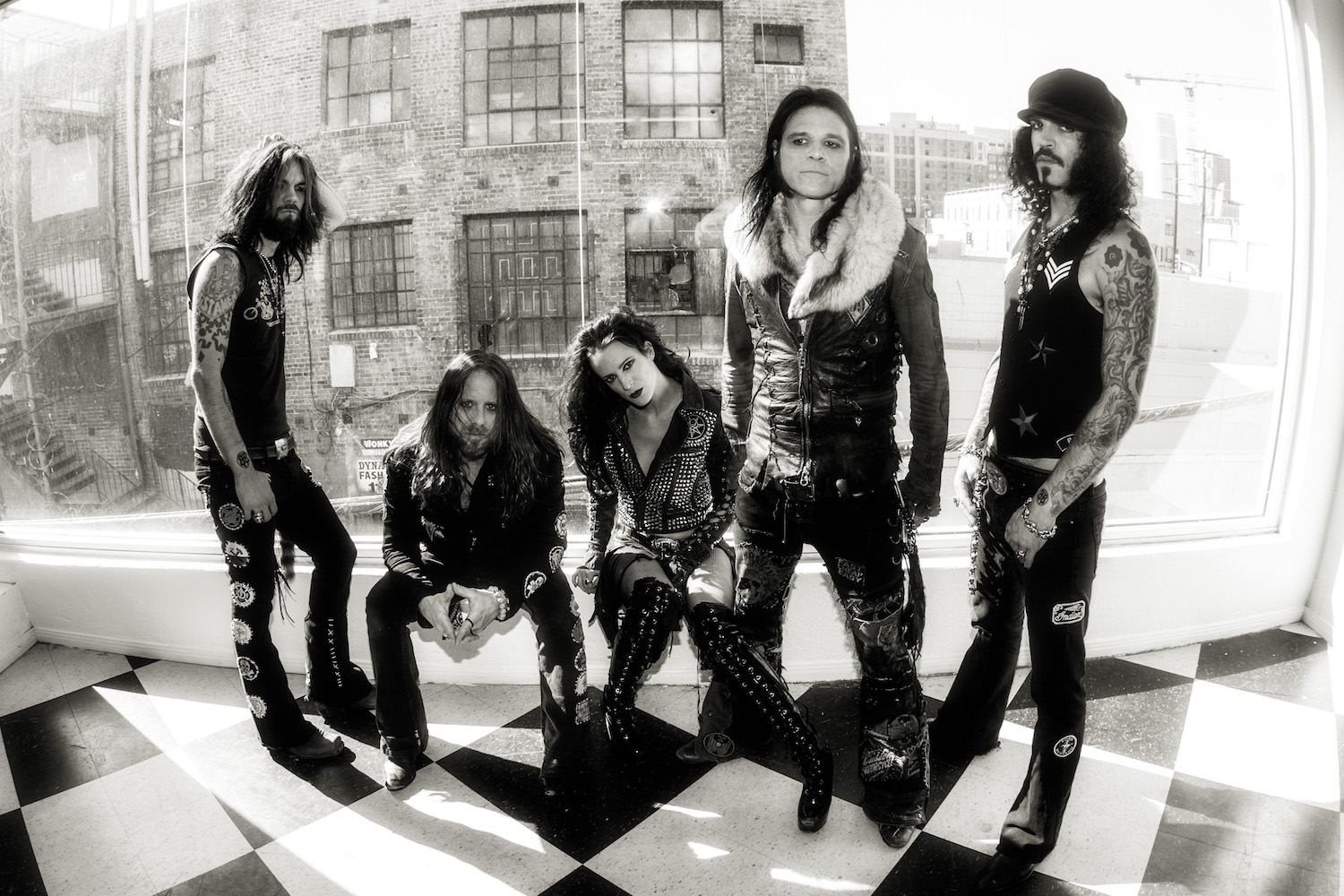 Aside from his longstanding role as the bass player in Alice Cooper’s traveling musical circus for the past nearly 15 years, Chuck Garric also sings and plays guitar in Beasto Blanco, a band he formed with guitarist Chris Latham in 2012, along with Alice Cooper’s daughter Calico. Beasto Blanco released their debut album ‘Live Fast, Die Loud’ in 2013, filled to the brim with fist-pumping, rip-roaring rock n’ roll, and took it to even greater heights with their stage-scorching, face-melting live performances which carried a similar ethos to the live entertainment aspect of a typical Alice Cooper show, but presented music with a decidedly more modern touch. On their second self-titled LP, slated for release on November 25th 2016 via Rat Pak Records, Beasto Blanco have continued from where they left off, coming up with another power-packed set of songs that feature Calico Cooper in a more prominent singing role. The band is playing a hometown record release show at the Whisky-A-Go-Go in West Hollywood on Thursday November 10th. Last Friday November 4th, Chuck Garric spoke to Metal Assault about his recent travels with Alice Cooper, the new Beasto Blanco album, the formation of the band, and more. Enjoy the chat below.

Chuck, it’s good to have you on Metal Assault. You just came back from quite an extensive tour with Alice Cooper. It must be a good feeling to have completed that, because it was a lot of dates.

Yeah, it is a good feeling. I always have that feeling when I get off the road with Alice Cooper. Every tour we sort of set out to do the same thing we do every year, and that’s go out there and destroy and entertain, and with the show that Alice puts together, we’re very successful at that. So at the end of the tour, I know we all feel like we accomplished something.

Right, but there’s no rest for you. Right now, as you said before the interview, you’re driving to San Diego to do a Beasto Blanco show tonight.

Yeah, we’re on the way to San Diego right now and Beasto Blanco is performing at Brick By Brick. Yeah man, no rest for the wicked. Sleep when you’re read, right?

Exactly. On tours with Alice, I’m sure you’re well taken care of in terms of the travel arrangements, catering and all that stuff. But I feel that touring can never really get comfortable, no matter how much you do it. You’re waking up in a different city every day. Would you agree with that?

Oh, I think it’s just part of the lifestyle. You need to learn to accept that or just stay at home and listen to music instead of play it. We’ve become a very tight family in Alice Cooper, and it’s the same with Beasto Blanco as well. Touring and traveling is part of the job description, if you will, and it’s part of the adventure. We’ve all learnt to accept it. It’s become our lifestyle, specially mine with Coop because it’s been such extensive tours for the last 15 years. 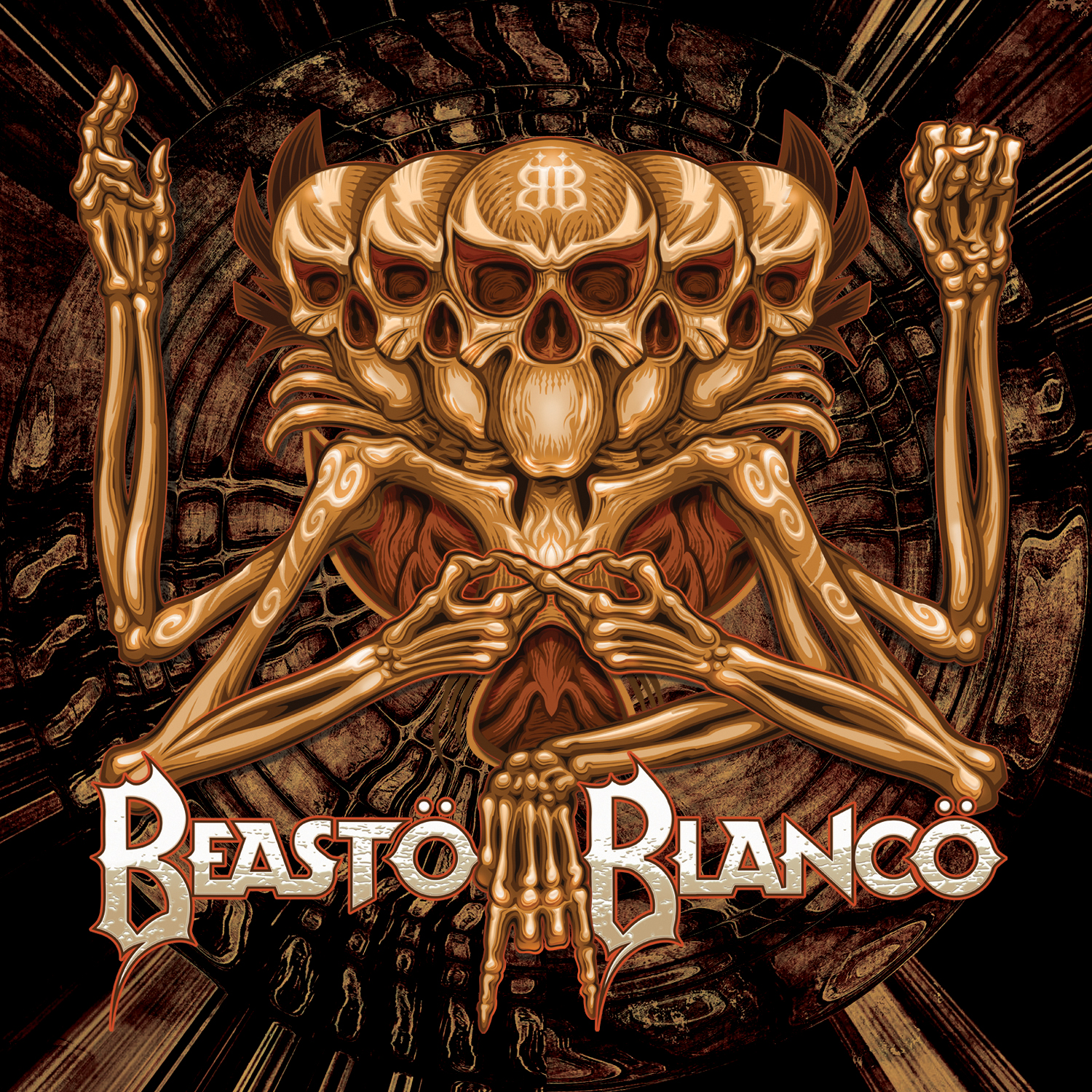 Coming to Beasto Blanco, that’s what this interview is mainly about. You’re going to do a few headline dates this month, I believe as release shows for the new album, correct?

Yeah, we’re going to play a couple of shows here on the West Coast, and then getting ready to take off for a month-long run in Germany in support of Boshe Onkelz.

That’s great. Talking a little bit about this band, you’ve been with Alice Cooper since 2002, but at what point did you think of forming Beasto Blanco and how did it all come about?

The idea of Beasto Blanco has been sort of circling my brain for a few years before it actually started. There were a lot of times I’d find myself on stage while I’m performing with Alice, and I’m watching Calico do her thing and perform. We would do side gigs in bars after the shows we played, and Calico would get up there and sing a song with us. So it was one of those things where I always thought I’d really love to see what she could do outside of the theatrical part. I wanted to hear her sing and see her be a band member and watch her perform. At the same time, Chris Latham and I had been writing songs for several years before that as well, because our friendship goes way back. So, it was just time that made it all happen. Latham and I started writing, we wanted to form a band, and the idea was just to have Calico come in and sing some backgrounds. Once that happened, we knew instantly that we had more than that with her, and we had more than that with the music, and it was time to move this thing forward and see what we can do with it.

You put out the debut album ‘Live Fast, Die Loud’ in 2013 and you’re about to release the second one. Would you describe Beasto Blanco as a band, or more like your solo thing?

No, it’s definitely a band, it’s a lifestyle, it’s a family. We all started this together and we’re still touring with the same members that we started the first tour with. It’s not about me and it’s far from being a solo band for me, or a project. I hate the word ‘project’. We write and perform our own original material, although we do a cover here and there, but we put our own twist to it to make it sound like Beasto Blanco. We’re our there to give our own art and have our own creativity in it.

You said you’re playing Brick By Brick tonight and you have a show coming up at the Whisky next Thursday. I’ve seen you before at the Viper Room too. Places like that are obviously very different from the big tours you do with Alice Cooper. Is it enjoyable for you to be able to do both kinds of shows?

Yeah, I’ve got the best of both worlds but it’s still the same animal. We’re still with guitars around our necks or with microphones in our hands. It’s just a different sized stage or venue. I get the opportunity this year to play clubs with Beasto Blanco, but then we go over to Germany and we’ll be playing arenas there. So, we’re comfortable in all settings. As long as we have a chance to perform our set and make our show happen, we’re good.

Talking about this new self-titled album, coming out November 25th on Rat Pak Records. How did you deal with being busy on the road for such a long time and also completing this album at the same time?

You know, it was a lot of fun to write this second record. We have the first record ‘Live Fast Die Loud’ already in the bag and we’ve performed several tours for that record. So, we’ve all pretty much had an idea of what we’d like to add to the next set, in order to grow the show and as musicians and songwriters. The second record was actually a lot easier for us to write, because we kind of knew where we wanted to fill in the gaps. I definitely wanted to feature Calico more as a singer on this record. I wanted to also incorporate some different tempos, so we could have some of these rolling ways, if you will, during the show, to be able to set things up a little differently. We also wanted to hone in on the lyrics more to tell a different story, and give people an idea of what Beasto Blanco is really about. 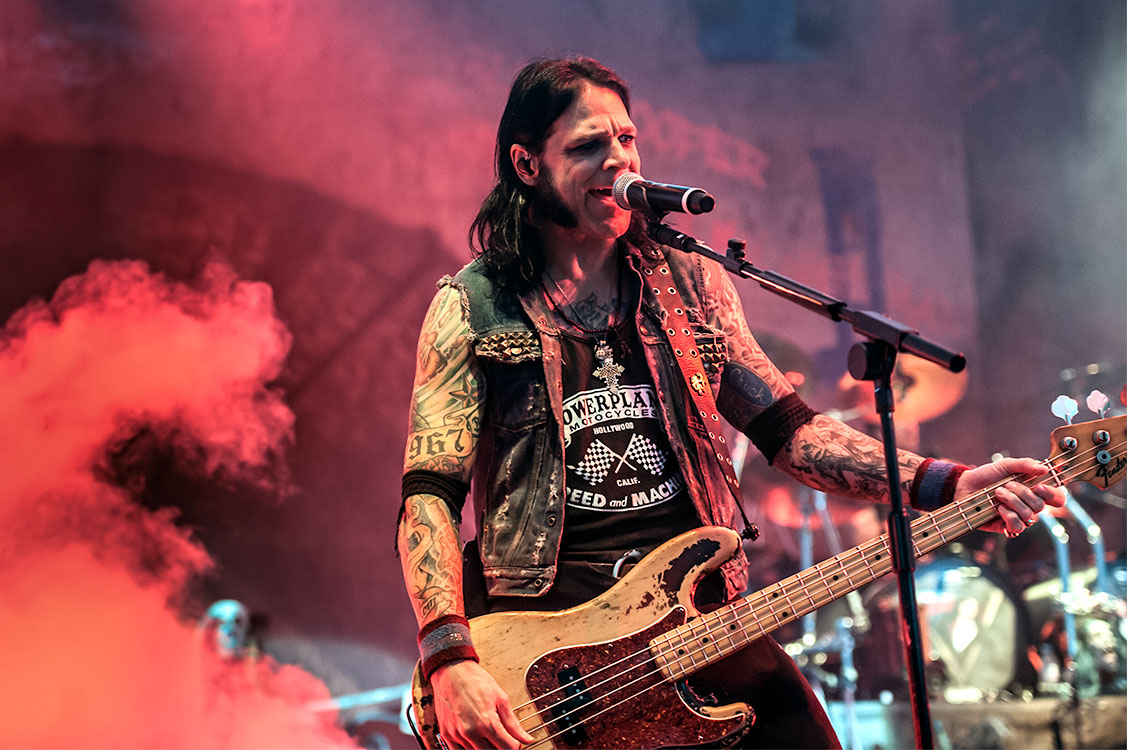 How long did it take you to finish the album, from the first song to the last?

I don’t know the exact time length of how long it took us to do the record, but it definitely took us longer than we expected. There were quite a lot of moving parts in there, but we took our time finding the right people, the correct producer, the right guy to mix it and the right label to release it. There was no hurry for us to release it until we knew we had everything we needed. We had to make sure we had all the elements before we just throw this record out there.

The number of gigs you’re able to do with Beasto Blanco, is that satisfying for you or would you like to do it on a more regular basis, time permitting?

Yeah, I’d definitely do a lot more if time permits. That’s the goal. Right now we’re going to see what’s out there and what comes our way, and we’ll take it from there.