The best thing about the sophomore album by Kook, affectionately titled II, is the clear progression in quality all across the board. The first thing you’ll notice is how clean the production value is with II; the production work done by producer Billy Anderson creates a clear sound that allows the music to fully breathe which in turn allows all the little parts of the music to have a concise life of their own. The attention to little details creates a powerful foundation for the music to resonate all throughout the record. There’s a great importance in the quality of detail with II given its conceptual style and Kook really hit the mark on their production of this one. 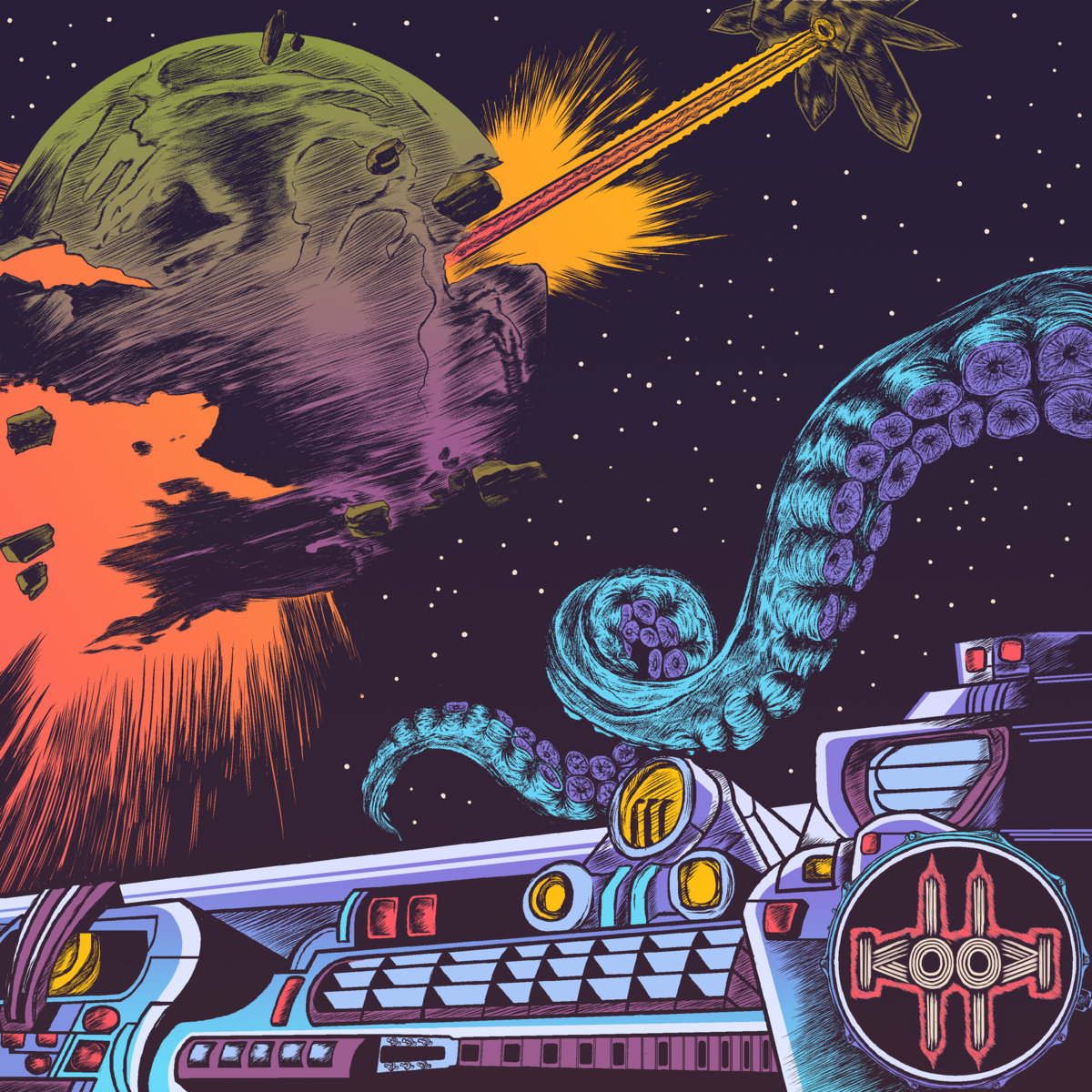 Kook completely lives up to its name with the style of music present within II. Within this record is a strange, and I hate to be so on-the-nose, but a “kooky” as hell approach to creating a unique form of doom metal. The mixture of groovy doom and slow blues rock conceives an atmosphere that indulges in its own strangeness and proceeds to form a powerfully unique form of being that is known as Kook.

The album opens up with an immediate atmospheric presence that can be described as a sort of loose, “spacey” vibe that is carried consistently through the whole album all while building into stronger forms of itself through the runtime. The eight minute intro track “Escape Velocity” fleshes out a fully immersive sonic atmosphere within the first minute of its run before popping off into an infectiously groovy drum beat that slides into the groovy doom/blues that makes up the musical personality of Kook. The vocal work of Troy Aschenbrenner is instantly striking in how it adds depth to the whole “heavy, slow blues” identity that is at the core of Kook. There are strong rockabilly sensibilities that lie within the vocal style which in turn cements the peculiar doom/blues identity of Kook.

The loveably eccentric rhythms that come to life within the first track show is the trademark of Kooks personal brand of music. Seriously, it’s in the bands name, if you can’t grasp the fact that the bizarre, indulgent nature of the record is simply the nature of its being you may not be paying attention. Kook thrives off its ingenuity with bringing together a definitive sound for the concept of not only this record, but their own musical brand. Kook is proud of their outlandish approach to crafting a strongly identifiable sound and that pride reflects in the palpable strength within the music.

Every little thing in this album comes together to create a large, impressive beast. From the eccentric vocal style to the off-kilter guitar rhythms, every piece of eccentric weirdness builds itself together to create an massive, unforgettable sound. Whether you agree with the sound of Kook or not the fact is that there is a very defined sound within II that engages the listener by introducing and familiarizing a fresh twist on blues/doom infused metal.

If you were in on Kook from their first album you’ll notice that there is a tangible refinement of the sound created with their first record, and that in itself is a victory, as development of sound from the first album to the second is hugely important in cementing yourself as a forthcoming act. On top of that, Kook expands their sound by taking the bluesy sound from the debut album and letting the compatible elements between slow blues rock and doom naturally tangle together in stronger form.. This not only creates a tighter sound overall, it creates a more impactful presence which firmly entrenches the bands imagery and style deeply into the mind.

The second track of the album, “Chains”, is hands down the most definitive Kook song on the record. The straightforward presentation of the blues/doom fusion within “Chains” creates a very concise packaging of the band’s overall sound. If there is one song you would want to check out to pique your interest in the band, I would recommend the track “Chains”. The band drops you into the core of their sound and lets you drown in its mastery with four minutes of “as-straightforward-as-it-can-get” Kook magic.

The track “Left Behind” is a pure masterwork in fusing together slow blues and creeping doom. I know I’ve said it before, but there is a ton of ingenuity within the creation of the entire sound that makes up II. Here’s the thing with Kook; this isn’t the band to come to if you want a traditional musical experience. If you’re looking for standard doom or groovy blues/psych you won’t find it here, instead what you’ll find is a mixture of the most minor peculiarities between those genres unified into a one-of-a-kind musical persona.

You may not understand Kook at first glance, but the magic of Kook is how simple to understand they are. As relentlessly bizarre as the band is, the sound is still very palatable in nature; Kook doesn’t get weirdly technical or create oddities for the sake of oddities, this is simply who they are and the genuine nature of the music makes it incredibly relatable. The whole point of music is to emotionally put yourself out there, to give people insight into the inner workings of your mind and heart and create a striking image of oneself based off emotional impact brought upon by nothing more than sound.

On that note we can confidently say that the second album by Kook is a musical victory in every way. Not only does the band create a satisfying concept that rests in the realm of “space doom”, they do it by expressing the most genuine forms of themselves with the music they create. Kook has soul, there is no doubt about it, and this is because they unabashedly put their soul into their music. They don’t play around with making traditional, tried concepts, because what’s the point? If you’re trying to make music that’s more akin to the common denominator you won’t be getting as much of your own personality into the music. What people want to hear is music with personality and Kook delivers this in spades.

The best thing about Kook is how natural their sound is; they aren’t actively trying to stretch boundaries or innovate approaches, they’re just doing their thing and being themselves. If there’s something music is in desperate need of nowadays it’s bands who want to be themselves and not try to be another version of music that is already happening all over the place.

The personality of Kook within II is endearing and infectious; just like in all of life it doesn’t matter if you’re the smartest or the most talented or the best looking, what people love the most is a genuine, unforgettable personality that shines as bright as the stars themselves.