September 8 2018, The Hollywood Palladium, Los Angeles CA: The world of hard rock and heavy metal has witnessed quite a number of high-profile reunions and comebacks in recent years, but none more exciting and unexpected than this one. In November 2016, German power metal legends Helloween announced that they would be joined by iconic members Michael Kiske and Kai Hansen for the “Pumpkins United” world tour, which would still feature all the existing members of the present-day lineup of the band, and would travel across the globe to perform an evening-with set that can be deemed “epic” in the true sense of the word. Starting in 2017, the tour finally arrived in the United States last week, and visited Los Angeles to be greeted by a packed house at the Hollywood Palladium. For metalheads, the magnitude of this event is so massive that it is hard to put in words, and only upon attending a Helloween show on this tour would you realize that this is the biggest, most unprecedented heavy metal show to have graced any stage in a long, long time. The excitement and anticipation among Helloween’s Los Angeles faithful was palpable, and the actual concert exceeded all expectations beyond anyone’s wildest dreams. 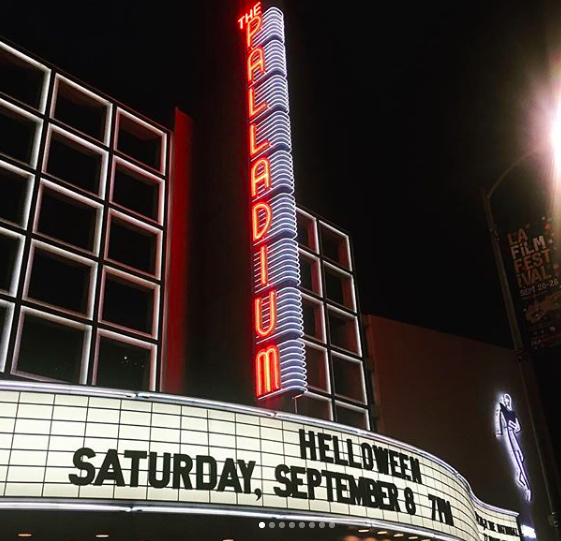 The queue of ticket holders and buyers wrapped all the way around the block and continued to be so even after doors opened at 7 PM. The entry lines moved along swiftly but it took the entirety of the one hour before show time to get everyone inside the building. There was going to be no opening act, which was the right move, as it would be completely unfair on any band to try to perform, knowing full well that everyone was eagerly and restlessly waiting for the headline act. Promptly at 8 o’ clock, the house lights dimmed, and Robbie Williams’ “Let Me Entertain You” was played on the PA as precursor to the start of the show. Helloween hit the stage and wasted no time in grabbing the undivided attention and adulation of the entire audience, opening with a full rendition of the 13-minute epic masterpiece, “Halloween”.

If you think LA concert audiences are not as responsive as those in other cities or countries, you’ve clearly never been to a Helloween show here. LA’s support towards the band has never wavered, even in the post-Kiske years, and with Kiske and Kai Hansen joining the band for this run, the support and response was undoubtedly going to be tenfold. Given the lineup and the content of the set list, this was easily the best LA audience Helloween has played in front of in a very long time. Fans sung all the choruses and verses loud and clear, and in perfect harmony with the band. The atmosphere inside the Palladium was ablaze with unparalleled power and passion. 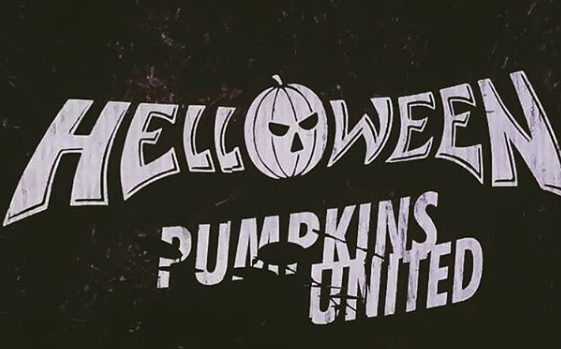 The set moved from one old-school gem to the next, but also had its fair share of recent material, and a brand new song  which the tour is named after, “Pumpkins United”, featuring the entire 7-member lineup that’s playing these shows. The most striking aspect of the show was the unified effort put forth by the combined vocal genius of Michael Kiske and Andi Deris. For the most part, Deris contributed vocals even on the Kiske-era songs, and at times vice-versa, which was a smart move because it perhaps helped both singers keep their voices intact for every night of the tour despite performing such long sets. The harmony and trade-off between the two lead singers was something you hardly ever get to witness at a metal show and it was mind-blowing and breathtaking to say the least. Longtime fans were delighted to note that Kiske hasn’t lost his chops one bit, as his voice has aged quite gracefully and is fully capable of singing all types of Helloween songs, including the ones originally recorded over 30 years ago.

But, probably even more thrilling was the involvement of founding member Kai Hansen in this show. He not only held fort on the guitar for the entire show, at one point he took center stage as lead vocalist for an ultra-old-school medley comprising songs from the very early years of the band wherein he was the lead singer. Fans in the audience couldn’t quite believe their eyes and ears, and the Palladium was engulfed by sheer delirium.

There are a lot of “evening with” shows where the singer/frontman spends a good chunk of time indulging in self-congratulatory monologues, but there was none of that with Helloween. They kept the talking to a bare minimum, and instead, the changeovers between songs were filled with animation shorts, so there was no dead time whatsoever. The other unique part of this show was the manner in which it executed the drum solo. As a tribute to deceased original drummer Ingo Schwichtenberg, a video of him playing a drum solo was running on the projection screen while the corresponding audio was played on the P.A., and present-day drummer Dani Löble was playing live in the foreground, making it feel like he was jamming with Ingo. As you can imagine, a near-three-hour set would go through its ebbs and flows. Helloween’s set had that with its blend of fast-paced power metal ragers, mid-tempo rockers and heartfelt ballads, and the fans loved every moment of it. For the entirety of this epic show, this band did not put a foot wrong.

The band performed two encores, because this was the kind of event for which one encore simply wasn’t going to be enough. The fans also got their second wind and third wind to keep singing and cheering along through every song, until the very end. If this is your first Helloween show, you couldn’t imagine a better first-time experience of seeing this band live, an experience that would undoubtedly make you a fan for life. And for those of you who have seen the band before but are too young to have had a chance to see them in the Hansen or Kiske eras, this was the true Helloween concert experience you have all been dreaming about since you became fans of the band, a concert you probably never expected to see.

In 2018, this is the kind of concert that makes you question, “Is this real life?” Helloween took Los Angeles to power metal heaven, and in the process, delivered what would surely be remembered as one of the greatest concerts of all time.