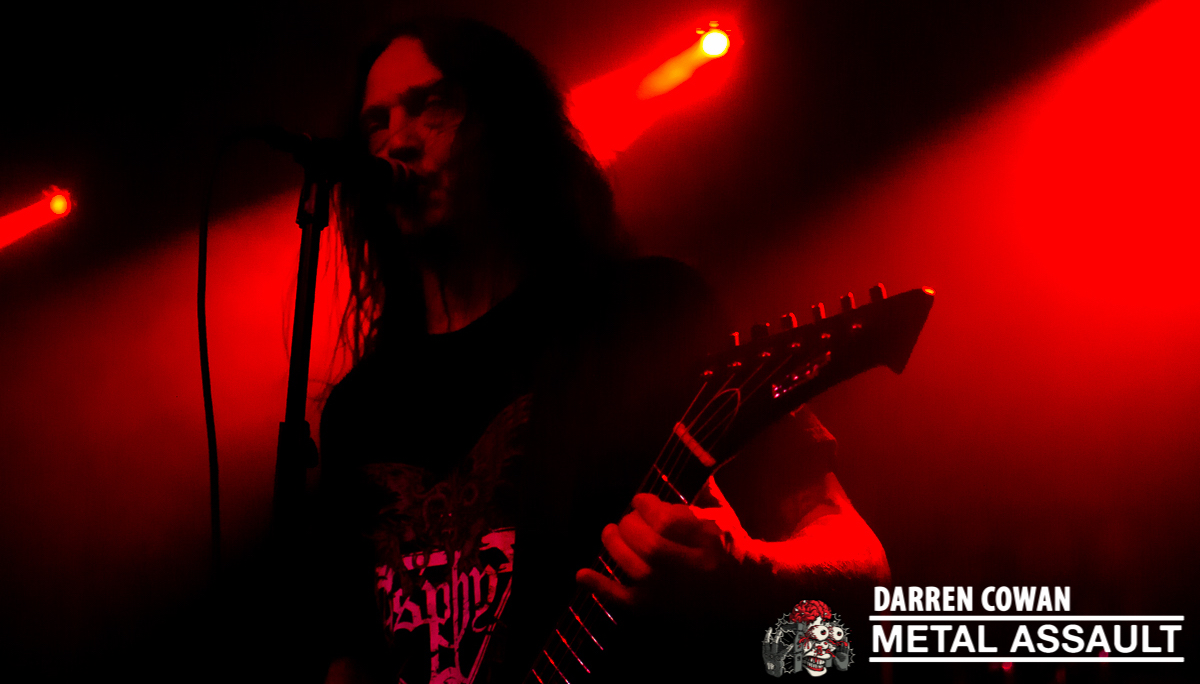 March 23, 2019, Come and Take It Live, Austin TX: Swedish death metal legends Hypocrisy made a rare appearance in the “Live Music Capital of the World” and capital of Texas, Austin, as part of Nuclear Blast’s “Death is Just the Beginning Tour” 2019. The tour was named after the label’s annual compilation, which was filled mostly with death metal artists in the beginning. Now the comps are more diverse and feature many veteran thrash artists. Hypocrisy headlining a tour of this dubbing made perfect sense as they are one of the longest running bands on the label… and play death metal. While they started as a straight-forward DM group, the band assumed a more melodic veneer just a few years into their career. Lyrically, they began to explore alien abductions and UFO conspiracies. Although they went this route, the group still plays death metal and don’t leave out early material.

Local Austin act Whore of Bethlehem was suited to opening for a death metal band of Hypocrisy’s scope. Not only do they play evil death metal, the band has shared the stage with metal royalty in Austin, Texas over the past decade. The group is a gateway to the best extreme metal musicians in Central Texas as many of the best extreme players have played and still play in the band. Original WOB guitarist, Ryan Sylvie recently stepped down after a decade to pursue a different path with his new band, Reptoid, that features ex-Suffocation drummer Doug Bohn. This was the first show for Sylvie’s replacement, Matt Bius. Bius’ six-string skills were on par with the band’s speedy, thumping attack. Vocalist James VanDenBerg’s ability to hold long screams is always astounding.

Where Whore of Bethlehem fit into the fold of old-school Hypocrisy, Darker By Design was another fitting local act on the bill. The San Antonio-based group mesh modern melodic death metal in the vein of The Black Dahlia Murder, Wretched and Ne Obliviscaris (Xenoyr Campbell makes a guest appearance on their yet-unnamed follow-up to the Sinister At Last EP) with classical elements such as a live cello player. The symphonic death metal style they play garners comparisons to Fleshgod Apocalypse.

The group played with Fleshgod Apocalypse a couple times and befriended them, which led to Fleshgod pianist Francesco Ferrini also guest appearing on their next album. The set consisted of recent numbers including the “My Shrine of Flesh” single and unreleased tracks “How Dead do I Look?,” “Between the Dead and Dying,” and “Sheol” from the forthcoming album. Cellist Christopher Brown aptly followed the band, even smacking his strings with the bow as if he were smacking bass strings. Darker By Design was the evening’s x-factor. The group got the crowd clapping during one catchy melody and really brought down a not-yet-full house. 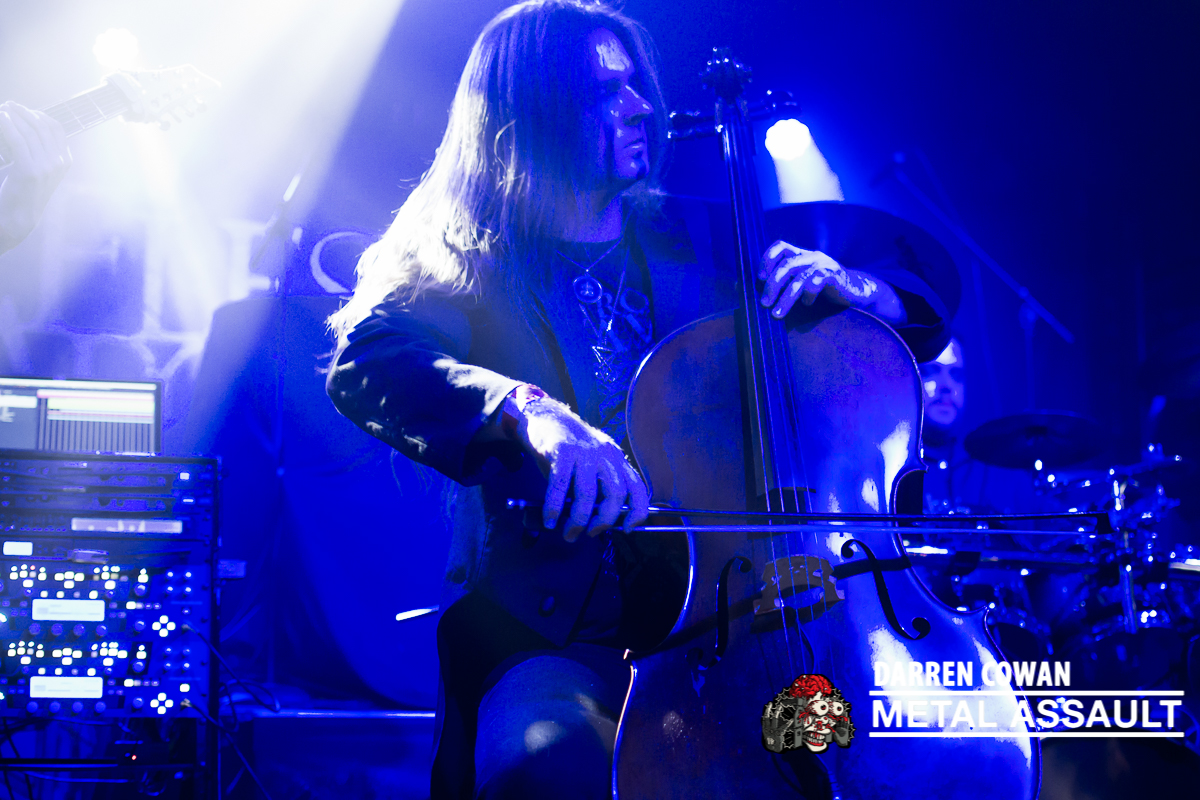 After the two local openers had done their part, Aenimus marked the beginning of the lineup of touring bands. The group has aptly been described as “technical extreme metal.” The band was very technical, especially the finger play of bassist, Seth Stone. They presented a modern style with elements of deathcore, prog and djent. Aenimus represents the growing change of sounds heard on the Nuclear Blast compilation. Maybe it’s because they’re not well known or it was their style, whatever it was, they received a lukewarm reception. The crowd wasn’t moving much. There was a noticeable letdown from Darker By Design. The band is talented; that much can’t be disputed, but they seemed out of place, stylistically. 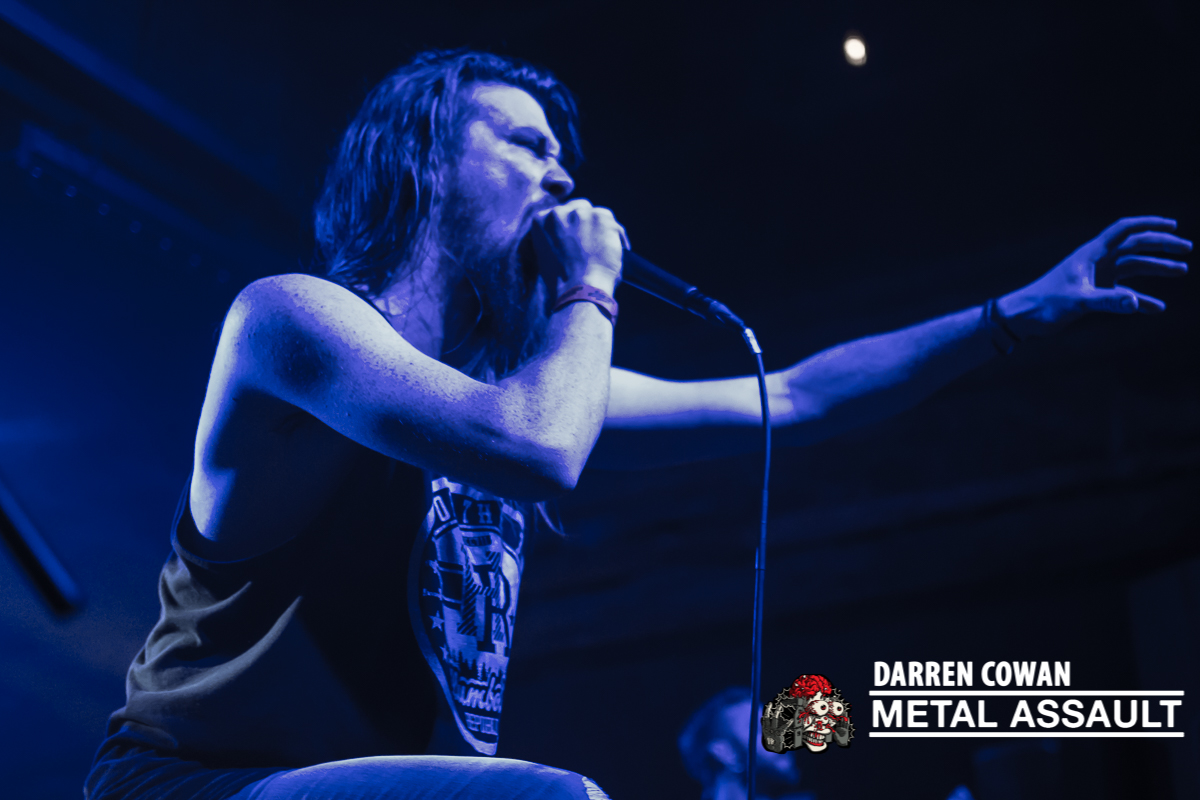 Many fans came to the show exclusively for Fleshgod Apocalypse. Fleshgod takes a dualistic approach to their sound. They play the dignified sounds of classical music through live pianist Francesco Ferrinnim, along with computerized orchestrations and operatic female vocals. Ferrinni exuded a Phantom of the Opera vibe. The group’s abysmal guitar tones seem lifted from the primordial murk of the earth. Sustained, rapid picked notes created a type of machine gun effect, in this way they’re akin to the Fear Factory of symphonic death metal. The band not only sounded good, but also looked good. Decked out in corpse paint and wearing period outfits, they looked the part of classical composers raised from the dead to rock the crowd. Ferrinni appeared to be wearing a mask by the string around his head, but I couldn’t tell because his face was turned toward the piano facing the wall. The soprano singer looked like an evil goddess, wearing a black dress, black crown and holding the Staff of Hermes. Fleshgod gave the crowd a sneak peak of their upcoming album Velen, which debuts May 24th, 2019, via the tracks “Fury” and “Sugar.” Don’t expect a curve ball in their sound. The songs were exactly want fans want. 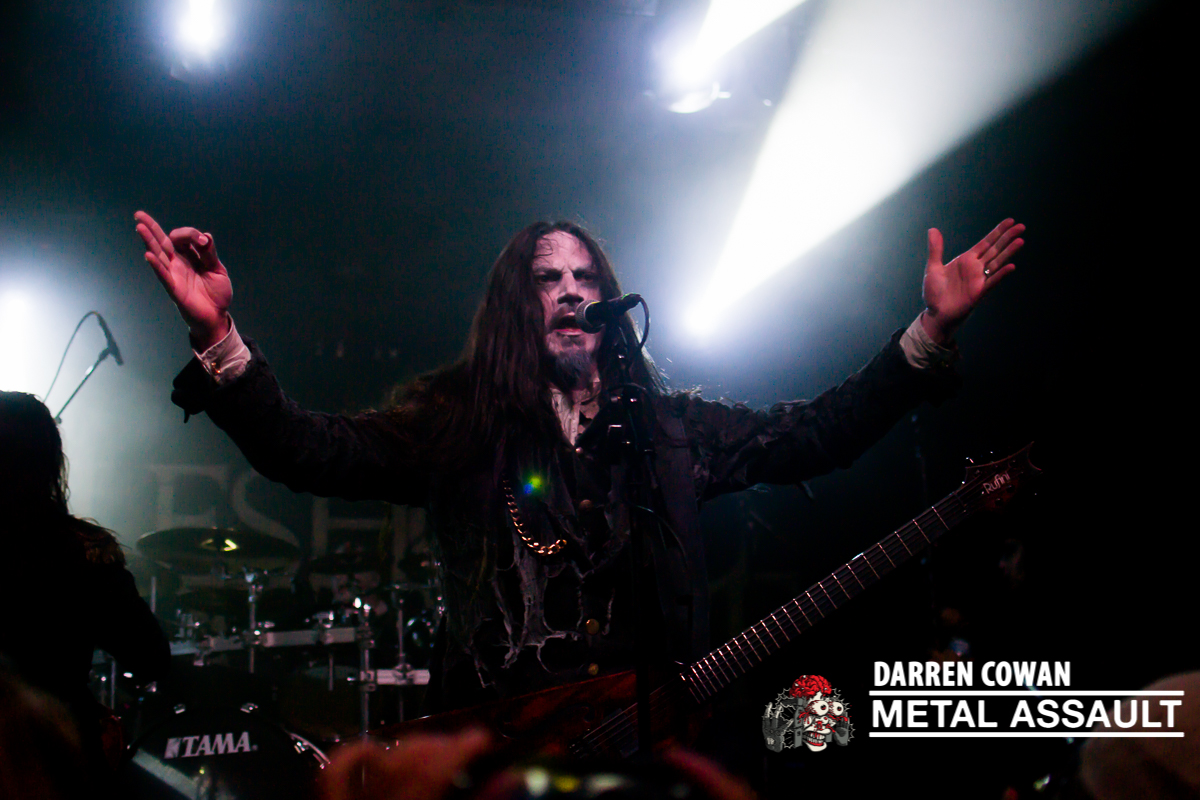 I’m not exactly sure when Hypocrisy last toured the States. A search said they toured in 2010 and their last release was the End of Disclosure full-length in 2013. Hypocrisy seems ripe for new material, but the packed crowd in attendance didn’t care. They came to hear established tales of abduction, artificial insemination and UFO cover-ups. After a strange intro courtesy of AC/DC on the PA, the band opened with “Fractured Millennium” from their 1999 self-titled album. Then they moved through material spanning their career including “Killing Art,” “Buried” and of course, the song title everyone kept shouting, “Roswell 47” from their crowned opus, Abducted. A medley of early classics—“Pleasure of Molestation / Osculum Obscenum / Penetrailia” made the old-school death metal fans happy. “Roswell 47” came as an encore complete with its intro, “The Gathering.” “The Final Chapter,” with its ominous atmosphere and abduction-scenario narration was the perfect gateway to the encore. View the set list below.

Their sound was tremendously heavy. Their rapid fire guitars jabbed the ears of attendees and induced pits and banging heads. I’ve seen drummer Horgh play before, but with Immortal. Hypocrisy’s drums always had a beefy sound, so Horgh suited the band perfectly. He sounded great bashing the drums during the old-school medley and nailed the thrashier beats from their later material. Peter Tägtgren’s voice was most impressive, though. He showed his range, burrowing deep into his gut for the older songs and letting the screams fly on newer material. He nailed the “1947” scream during the encore.

This concert was the first Hypocrisy show for many in the crowed, including myself. Hypocrisy just doesn’t tour the States much, as is the case for many European bands. Hypocrisy is unique in their style and lyrical topics. These two facts made the show irresistible to their fans to the point of a packed crowd. Thanks to a long, consistent career and the efficacy of the internet, Hypocrisy made out well in Austin. I can’t imagine that happening in the ‘90s. The numbers are also a testament to the thriving nature of death metal. Death metal is alive and well… and hardly just the beginning.

– Images and Words by Darren Cowan 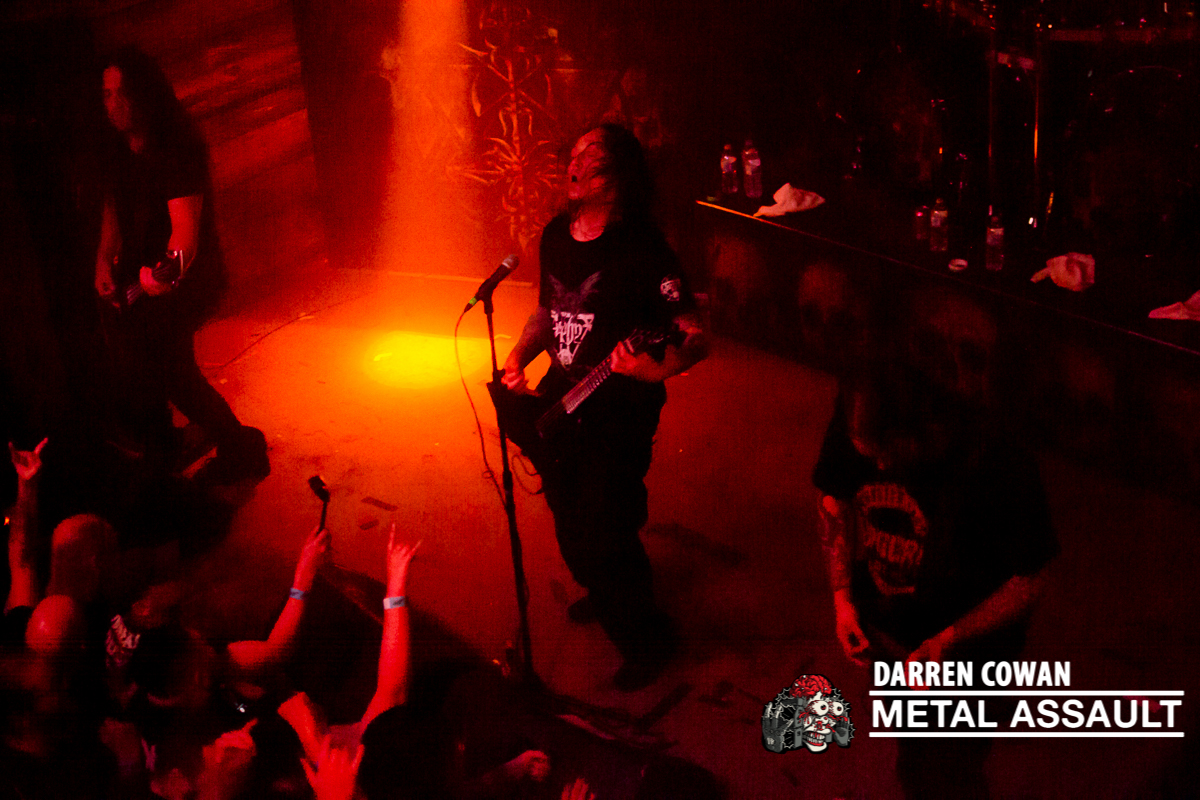