San Diego CA hard rock / New Wave of Traditional Heavy Metal duo TZIMANI will head out on one final tour to support their 2018 self-titled debut EP. Aptly titled the ‘Final Hour’ tour, this three-week trek will take Tzimani up the U.S. West Coast, through previously unconquered markets in Canada, and back down through select U.S. markets, for a total of 21 shows in 24 days, starting on March 21 and ending on April 13. Following this run, the band will buckle down to write and record brand new music for their next release, set to be out later this year, with more details to be announced very soon. In the meantime, witness the high-octane Tzimani live performance on the ‘Final Hour’ tour! 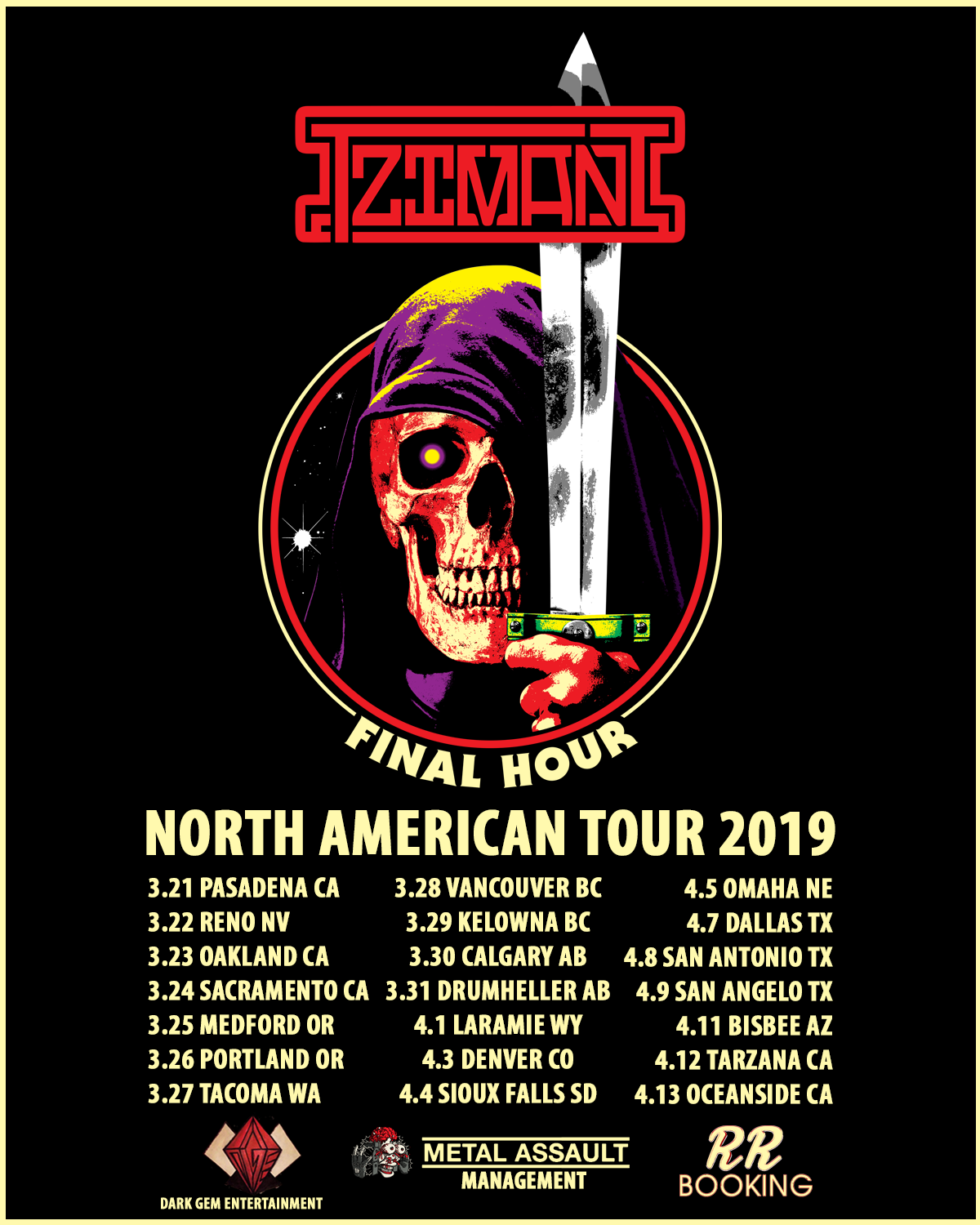 For those uninitiated, Tzimani presents a bold new take on traditional heavy metal which infuses modern elements into old-school stylings that have existed for more than four decades, and giving listeners catchy, memorable tunes that leave a long-lasting impact but are not simply a regurgitation of things already done to death by countless bands over the years. Tzimani stands on the perfect middle ground between the old school and the new school of heavy music, and has the ability to make the same kind of instant impact on fans of both styles. The band’s live performances also reflect this special quality, as the music itself exhibits some of the old-school tendencies, while the two-piece setup gives it a modern feel which separates Tzimani from your run-of-the-mill traditional metal revivalist bands. But don’t take our word for it. Crank the debut EP, come to a show, and find out for yourselves.

Based out of San Diego, California, Tzimani (pronounced “Si-maani”) was formed in 2017 by brothers Eddie Vazquez (guitar, bass, vocals) and Sebastian Vazquez (drums), and has quickly made waves in the underground hard rock / heavy metal circuit, circulating rapidly as a breath of fresh air in the modern-day musical atmosphere. Catchy melodies, scintillating guitar leads, groovy rhythmic patterns and soaring clean vocals punctuate songs that force listeners to instantly hit “Repeat” and be left wanting more. Taking natural influence from listening to the classic hard rock and traditional heavy metal through their upbringing but not consciously attempting to be a revival band, Tzimani infuses elements from other sub-genres and adds a modern touch to their brand of heavy music, self-coined “trad mod”.

With an ambitious attitude since day one, Tzimani is by no means a weekend warrior band. The duo released their first two singles in 2017 and toured the Western US in 2017 to promote their newly formed sound. In 2018, they completed three more tours, hitting parts of the East Coast for the first time, as well as playing their first Canadian show, to a rousing reception and unanimous approval from the metal-loving crowd in Vancouver BC. With the Spring 2019 ‘Final Hour’ tour, the band ventures to hit yet more new markets in the US and Canada.

Across their travels and regional appearances, Tzimani has shared the stage with several established national and international touring acts, such as Swedish groups Avatar and Truckfighers and fellow American bands Mothership, Huntress and Vicious Rumors.

Tzimani is signed to Noize Cartel Records for digital distribution, but the band self-released the debut EP on all physical formats, CD, vinyl and cassette. Tzimani is also featured on the No Legacy vinyl compilation, produced by Erik Kluiber (Void Vator / ex Gypsyhawk), showcasing nine of “the finest underground heavy bands from Southern and Northern California”, according to Kluiber.

Keep your eyes and ears peeled for Tzimani as they gear up to continue storming through the scene on a headstrong mission to leave an indelible stamp on the genre with their signature sound and unique performances!

What the press is saying about Tzimani:

“Despite sparking synapses associated with a variety of high-octane hard rock and metal birthed in the days of yore, this self titled debut EP genuinely feels fresh-faced. Pull on your leather, put the pedal to the metal, and smell the gasoline …” – Sleeping Village Reviews

“One of the best bands to come out of the San Diego area and another great signing by Metal Assault Management. These tracks fill you with that 70s-80s Heavy Metal you love and need in your life, but it’s updated just enough to give their own flavoring. What makes this even better is that this band is two brothers, Eddie and Sebastian Vazquez. It’s great to see family that gets together for the power of metal. They are going to go far if they are capable of this so early in their career.” – That Drummer Guy (Tzimani EP lands at #5 on top 15 EPs of 2018)

“Considering the relative short time together as Tzimani, it’s easy to gauge the band’s great instincts when it comes to songwriting, performance, and execution. They have all the tools to get the beer flowing and the fists flying high, and that’s the name of the game to building an audience in the metal landscape.” – Dead Rhetoric

“The song [Overdrive] is a thrashing speed demon of a hit, only ever slowing down to release a soaring refrain with a powerful vocal delivery. The guitars are downright filthy in their approach, ripping through solos and arpeggios with ease, not to mention the blistering pace of the verse riff.” – New Noise Magazine

“This was only an EP, can you imagine how their full length will be like? This nice little teaser will have your speed demon wanting more.” – Ugh Metal