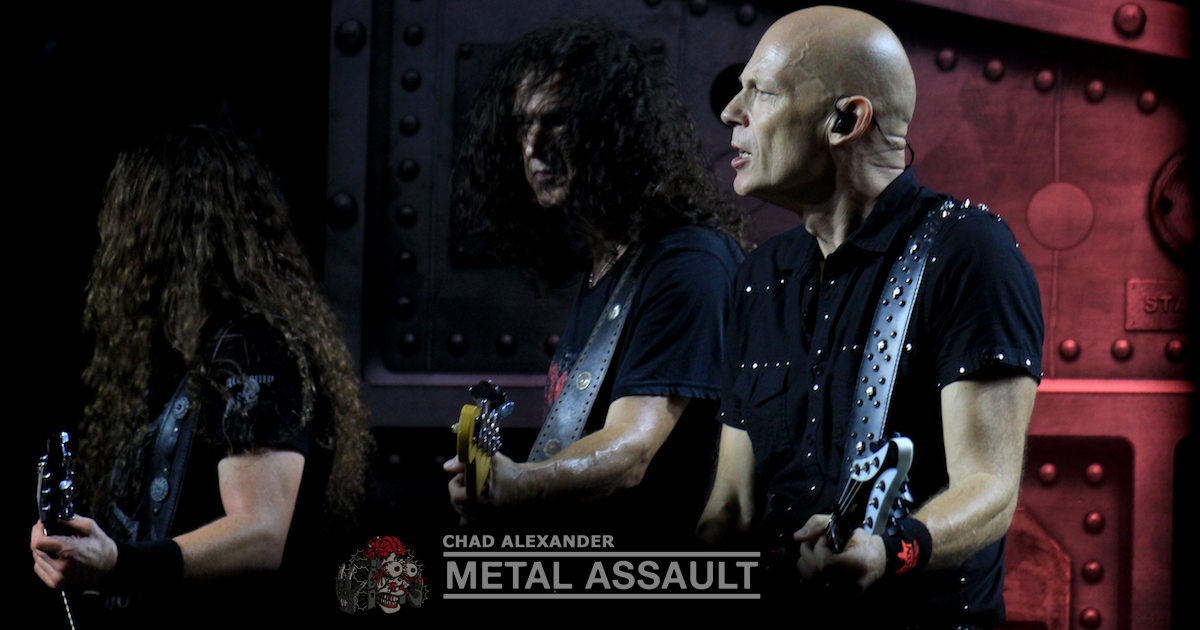 September 29 2018, The Rose, Pasadena CA: It is the year 2018, and in the world of hard rock and heavy metal, being a “legacy” act is a popular trend. These are bands that have been in existence for 30+ years and are going around playing shows wherein they merely cash in on the casual fans wanting to hear a handful of “radio hits” or “classics”. In a lot of cases, most of the original lineup of the band is not even part of it, and it is nothing more than a glorified cover band. German classic metal titans Accept first started out more than 40 years ago, but are one of the very, very few bands of their lifespan to be defying the norm. Last Saturday, they played a show at the Rose in Pasadena as part of their ongoing touring run, and showed how it should be done.

As the story goes, Accept were on a long hiatus in the late ’90s and early 2000s, but returned with a new lease of life under the frontmanship of vocalist Mark Tornillo. In the last 8 years, the band has been as prolific as ever, having released four studio albums and toured the world many times over. The songs on these albums live up to the band’s legendary stature but at the same time are not intended as a throwback and offer a fresh approach instead. By  no means is Accept a legacy act, and anyone not living under a rock realizes that Tornillo certainly is no longer “the new guy”. The latest album The Rise of Chaos was released in 2017 and the band is still out on the road promoting it. The set list in Pasadena featured as many as four tracks off of the newest LP, plus a good chunk of material from the Tornillo era, so to speak. But of course, for the old-school fans, there were also plenty of classics and deep cuts from the back catalog. In a set that started promptly at 9 PM and ran for a full 2-hour duration, Accept succeeded in delivering absolutely everything fans old and new could have asked for.

Set list selections aside, the most striking aspect of a modern-day Accept show is the sheer energy the band exudes as a group, even as they go about delivering absolutely flawless performances every night. Accept is exemplary in their stage moves, facial expressions and crowd interaction, and undoubtedly have all the ingredients of an entertaining show for the audience, a show worth the admission price and then some. Through this particular show they proved that it is indeed possible to not only maintain peak standards but even get better with age, as a pleasantly stunned Pasadena audience watched and cheered along in complete awe-struck daze. Hardly anyone can argue that this incarnation of Accept is one of the absolute best live bands going around, the cream of the crop in every sense.

While every moment of the show was top-notch, one undeniably unusual element was the floor setup at the Rose, which comprised five rows of dinner tables stacked all the way up to the edge of the stage, and a general admission standing area behind and around the tables, wherein most of the “regular” folk watched the show from. Even Mark Tornillo made a remark on it at one point between songs, jokingly saying that may be he should have brought a chair and prepared some bluegrass material. That said, it is not a knock on the venue at all. Any venue that supports heavy music in this day and age has to be respected and commended for it, and if dinner table shows guarantee a higher payout for international touring bands, then who can blame them for taking such shows? The biggest upside of all this for the fans is the intimacy factor. Where else do you get to see a band like Accept so up-close and personal? Instead of playing one big theater show, the band ended up doing three shows in smaller rooms in the Los Angeles area on this run, which makes it even more special and memorable for those who attended.

With all five members of the band at the absolute peak of their powers, Accept’s set moved along swiftly from one song to the next, and before anyone realized it, they played 18 songs and departed the stage, only to come back for a 4-song encore of some of their most loved classics. The band sounded loud and clear through the PA at the Rose, and excited fans raised the decibel levels further by singing along at the top of their voices at every opportune moment. Fronted admirably by not-new-guy Mark Tornillo, led by the old firm of guitarist Wolf Hoffmann and bassist Peter Baltes, and backed excellently by rhythm guitarist Uwe Lulis and drummer Christopher Williams, Accept left no stone unturned in putting forth the best possible representation of what the band has always been synonymous with, i.e. heavy metal at its purest.

Say No to legacy acts, say Yes to Accept.