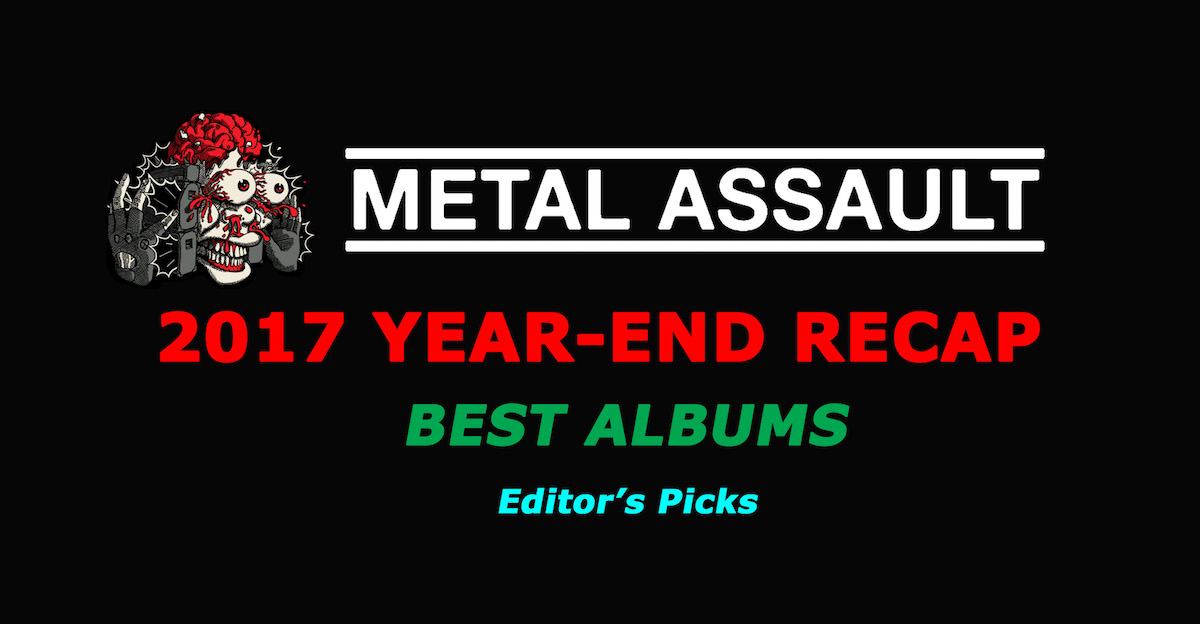 Once more round the sun we have traversed, as another year is about to end, and with that it’s time to look back at what 2017 has offered to the world of heavy music. Countless albums were released, some forgettable, some disappointing, some downright laughably bad. But as is the case every year, there were many great ones that stood out, with some longstanding bands proving they still have the creative fire burning within, while younger, newer bands also stood up to be counted. Without further ado, here are my picks for the best albums of 2017.

#20. Empyrean Throne – Chaosborne: Since 2011, Lake Forest CA symphonic black metal group Empyrean Throne has been cultivating a sonic fierceness that largely remained a secret underground entity, until 2017. Making their M-Theory Audio label debut, the band unleashed their first full-length ‘Chaosborne’ this year, and exceeded all expectations, with a well-rounded slab of extreme metal that is as powerful as it is polished. The 11-song, hour-long piece is strong enough to garner attention and appreciation from even the staunchest black metal critics and elitists, and supersedes better known names in the sub-genre. ‘Chaosborne’ is the grimmest soundtrack to your blackest rituals.

#19. Zeal & Ardor – Devil is Fine: The brainchild of New York City based Swiss-American composer and musician Manuel Gagneux, Zeal & Ardor is undoubtedly the most unique, innovative and eccentric album release of 2017, and one that certainly caught metalheads by surprise. Gagneux ventured to combine African-American slave music and black metal to create the album that became ‘Devil is Fine’, a set of recordings that truly paint a compelling picture onto the listener’s mental landscape. This is by no means your typical metal album as the sonic elements delve into multiple styles and genre, yet the musical expression is very much akin to that of a dark metal record. ‘Devil is Fine’ is groundbreaking and highly praiseworthy.

#18. Lecherous Gaze – One Fifteen: Oakland CA group Lecherous Gaze are one of a kind with their blend of rock, metal, proto-punk and psychedelia, and this is greatly proven on their second full-length offering, ‘One Fifteen’. Driven by immaculate guitar tones, punctuated by masterful riffs and solos, decorated by smoothly flowing rhythms, and spiked by raspy vocals, this seemingly mellow album is like a sneak attack, and captivates you before you know it. Through ‘One Fifteen’, this band has taken proto-punk and turned the genre onto its head in a way that finds a place in the world of hard rock and heavy metal but at the same time stands out on its own.

#17. Striker – Self-Titled: While still basking in the glory of their scintillating 2016 album ‘Stand in the Fire’, Canadian metal band Striker did not waste any time and released its follow-up less than a year later, a self-titled effort and their fifth full-length overall. Filled to the brim with catchy vocal and guitar hooks, melodies and harmonies, this Striker offering does not disappoint whatsoever, and lives up to the band’s reputation as indisputable frontrunners of modern-day traditional metal. Going from strength to strength with every song and not with a single dull moment anywhere, Striker’s self-titled record is nothing but pure delight for old-school metal fans and album lovers alike.

#16. Sepultura – Machine Messiah: Even though most of their detractors and naysayers would expect or want them to, Sepultura is not a band to be haunted by the ghosts of their own past, and instead continue delivering the goods even in their present-day incarnation, one album after another. Their latest release ‘Machine Messiah’ is a few notches above their past few albums in terms of the sheer quality and power of the songwriting, recording performances and production value, and is a beast of a record in every sense of the word. Instead of living in their past and cashing in on the nostalgia, Sepultura are still challenging and expanding themselves, adding modern contemporary elements to their Brazilian thrash roots and doing a mighty fine job of it. ‘Machine Messiah’ is flawless, and years down the road, will be hailed as a classic.